If you have traveled through Mexico, or if you live in Mexico as an expat, you have likely come across pulque. You might be wondering to yourself: What is pulque? What does it taste like? Is it alcoholic? Therefore, Expat Insurance thought we would put together an article trying to get to the bottom of that classic question: What is pulque?

If you’ve wondered what is pulque, then you might be surprised to learn that pulque was the first alcoholic drink in Mexico. Pulque is found across the desert regions of Central Mexico, where agave plants thrive along the rocky, dry terrain. Therefore, Mexico City and its surrounding areas have become meccas for pulque-lovers.

These agave plants—or maguey as they are called in Mexico—have a sweet sap in their center. This sap is called octli or aguamiel (which literally means “water honey” in Spanish). However, when it is fermented, then it becomes a rich, alcoholic drink called “pulque”. Pulque is a great source of protein, probiotics, minerals like iron, amino acids, and vitamins C, D, and E. For this reason, the octli and even pulque were often served as medicine in pre-Hispanic Americas.

Pulque tends to be a tart-sweet drink that is generally white. This drink is thicker than most drinks, putting it on par with a type of heavy cream. However, the texture is quite odd—with somewhat of a mucilaginous consistency. This can be offputting to some Mexicans and foreigners alike. However, those that love pulque ardently defend the intoxication from this traditional drink. Though it does have a strong intoxication of the body, pulque drinkers say that their mind remains completely clear. Though it has been known to affect the digestive system of those experimenting with pulque for the first time.

What is Pulque Compared to Tequila or Mezcal?

Unlike tequila or mezcal, pulque is not a distilled liquor. Instead, pulque is made from the fermented sap of the agave plant. This fermentation process makes it technically a wine—not a spirit. Because of this technicality, it is easier for pulque to be bottled and sold on shelves in the United States. However, those who have tried bottled pulque generally say that it tastes thick sour milk—a byproduct of the pasteurization process required for its sale and exportation. No, if you want to try pulque you have to try it in Mexico.

From an ecological perspective, pulque is less destructive and more sustainable to the surrounding wildlife than the production of tequila or mezcal. This is due to the fact that the production of pulque does not kill the agave plant. However, tequila and mezcal both have to unearth the agave plant, chop off the leaves, and then roast the heart or piña. Instead, pulque is made by less-invasive and natural procedures.

How is Pulque Made? 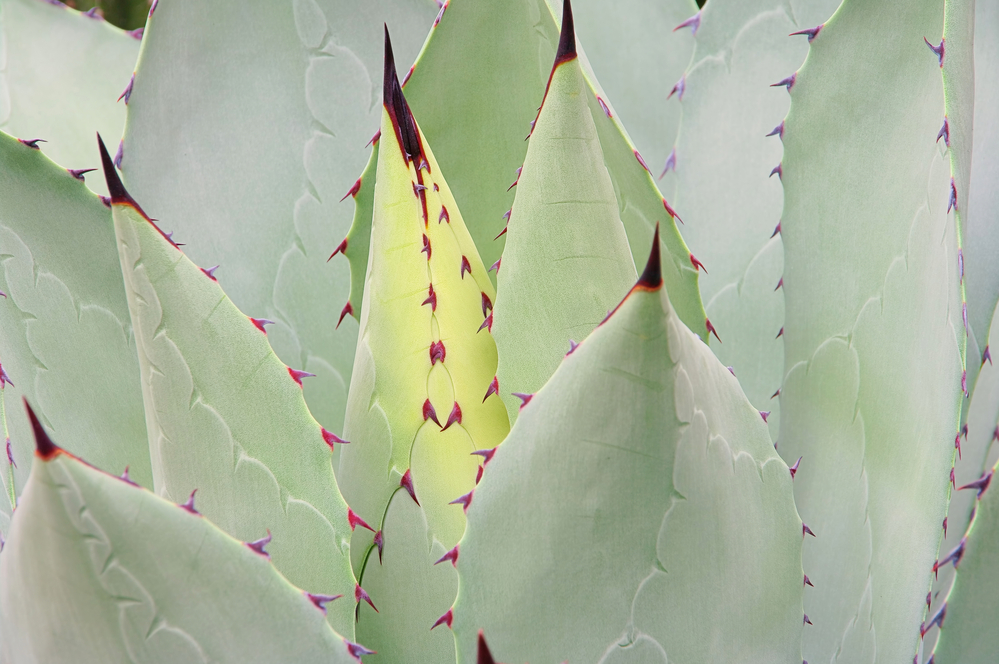 In attempting to answer the question of what is pulque, you must first ask yourself: how is pulque made? When the agave plant reaches its final mature phase, it begins releasing its sap from the leaves which then collect in the center of the plant. The plant secretes this aguamiel in the final year of its life, even secreting up to 600 liters of sap in its final stage. Though pulque can be made from six different types of maguey, the most common pulque plant is made from the San Francisco Tlaculapan agave strain which takes an extraordinarily long amount of time to mature. This agave plant takes up to 12 years to mature before it starts releasing agave. I once heard a joke in the country about a young farmer who plants his agave crop and then begins to have sons to help him with his harvest.

Sometimes a few center leaves are removed to better expose the piña in order to collect the aguamiel. Then the sap is just scooped up in buckets and stored in large, plastic barrels and left to ferment. Pulque can be fermented with bacteria in the air and wild yeast. Though today, it is typically just fermented using the bacteria in a bit of pulque that is saved at the bottom of the barrel from the last batch.

During fermentation, pulque typically reaches around 3% – 7% alcohol by volume (ABV)—though generally on the lower end of this spectrum—this puts it roughly on par with light beer. You can continue to ferment pulque to reach a higher alcoholic percentage, however, this also increases the risk of contamination which could potentially get someone rather ill, spoilage of the product risking their entire harvest, and cultivating a sour flavor over its natural sweetness, which would make it largely unpalatable. Therefore, to increase the potency, sometimes a bit of mezcal is added to the mix.

The History of Pulque

Our next question in answering what is pulque, we must inevitably explore the history of pulque. The history of pulque is as rich and complex as its flavor. Pulque has been produced in the region of Mexico since the Mesoamerican period—around 2,000 years—making it likely the oldest drink in the Americas.

Though it is older than the Aztec Empire, the first depictions of the history of pulque and its consumption and production come to us from excavations at the Great Pyramid of Cholula (which is the largest pyramid in the world). Unearthed in 1969, a mural entitled The Pulque Drinkers was painted around 1,800 years ago.

Nevertheless, the history of pulque is generally centered around the Aztec Empire.

The history of pulque is steeped in legend. Many myths tell the tale of Mayahuel, the Aztec goddess of fertility, and how she fell in love with Quetzalcoatl. In some tales the fertility goddess’ grandmother sought another husband for Mayahuel, so they embodied different branches of a tree so as to be able to be together. The tree was subsequently cut down, so Quetzalcoatl buried the remains of the tree. From these remains, the agave plant weeps Quetzalcoatl’s tears. Other adaptations on the legend say that it is actually Mayahuel’s blood.

Though Mayahuel was the goddess of fertility, through her association with pulque, she also became associated with intoxication and adultery. Thus she embodied a form of duality between being highly revered, yet curiously also shamed for her association to alcohol. For example, one month of the year was dedicated to veneration and worship of Mayahuel, however, anyone born on this day was said to be fated to become drunks and adulterers later in life. This dualism would carry on to many of her 400 children which tended to become associated with opposing archetypes like lucidity and confusion, dreams and awakening, and of course birth and death.

Pulque itself also had a form of duality. Firstly, it was considered to be the Aztec “drink of the Gods”. Priests and nobles drank it, and the only commoners who were allowed to drink it were either pregnant or elderly. As much as pregnancy and old age were revered as sacred periods in the life cycle of the ancients, there was likely a pragmatic aspect to this, because of the many vitamins and minerals that octli and pulque contain.

However, the Aztecs looked down on drunkenness. It was seen as uncivilized and therefore culturally taboo. So much so, that public intoxication was punishable by death unless you were over the age of 70. However, priests were allowed to become intoxicated in channeling the divine in sacred rituals. Also, victims of sacrifice were allowed to drink pulque to ease the pain of their terribly gory deaths.

In pre-colonial Mexico, the production of pulque originally involved collecting the sap in a gourd. Then the sap would be fermented inside barrels left open to the air.

If you are wondering what is pulque like today, then you might well have noticed that pulque has found a resurgence in modern Mexico. Often popular with youths, trendy bars that center around pulque—called pulquerÍas—are cropping up around cities like Mexico City and Cuernavaca.

Before one had to go to the countryside to find pulque, however now it is becoming a popular drink for college students and creatives as much for its place in Mexican culture as for its inexpensive price. Though finding the naturally fermented pulque is mandatory in any pulquerÍa, the newer types of pulque—called curados—have also helped in pulque’s hipster renaissance.

What is Pulque Curado? 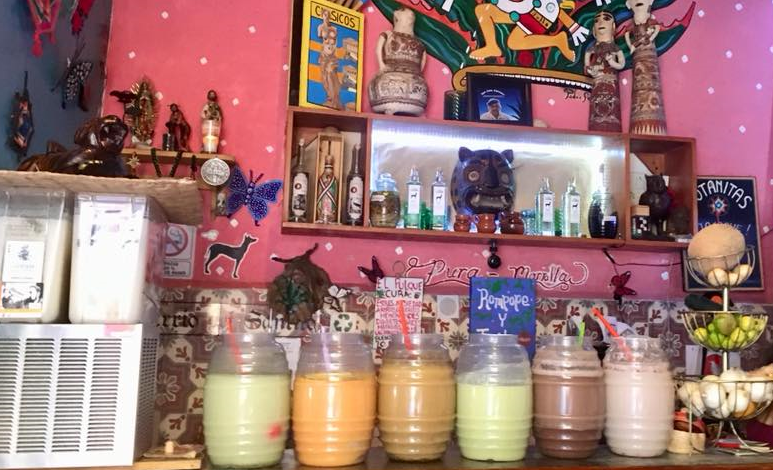 You might be wondering what is pulque curado at this point? Pulque curados (or simply curados) are different flavors of pulque. Though the natural flavor of pulque (or pulque natural) is still a staple in any pulquerÍa, now the pulque natural is being blended with fresh ingredients to create a multitude of flavors.

These flavors are generally sweet (though my gardener has told me that his favorite curado is a tomato and oyster-flavored pulque which he claims is similar in flavor to clam-based cocktail drinks). Many of these flavors are created from fresh natural ingredients. I often enjoy the curados at my local pulquerÍa which include ginger. Often my local pulquerÍa will mix several fruits with ginger to create artisan flavors that appeal to youths or inexperienced pulque drinkers. Some of these curados can be quite exotic like zapote negro and guayaba. Others can be incredibly creative such as rompope and tortilla.

Other pulquerÍas take this mentality to the next level crafting curados flavored like cookies and cream or animal cookies. These are clearly trying to grab a younger base which has helped revitalize pulque today. So what is pulque looking like in the future? Like microbrews at the start of the 21st Century, pulque looks like an emerging market.