The Best Time to Visit Thailand 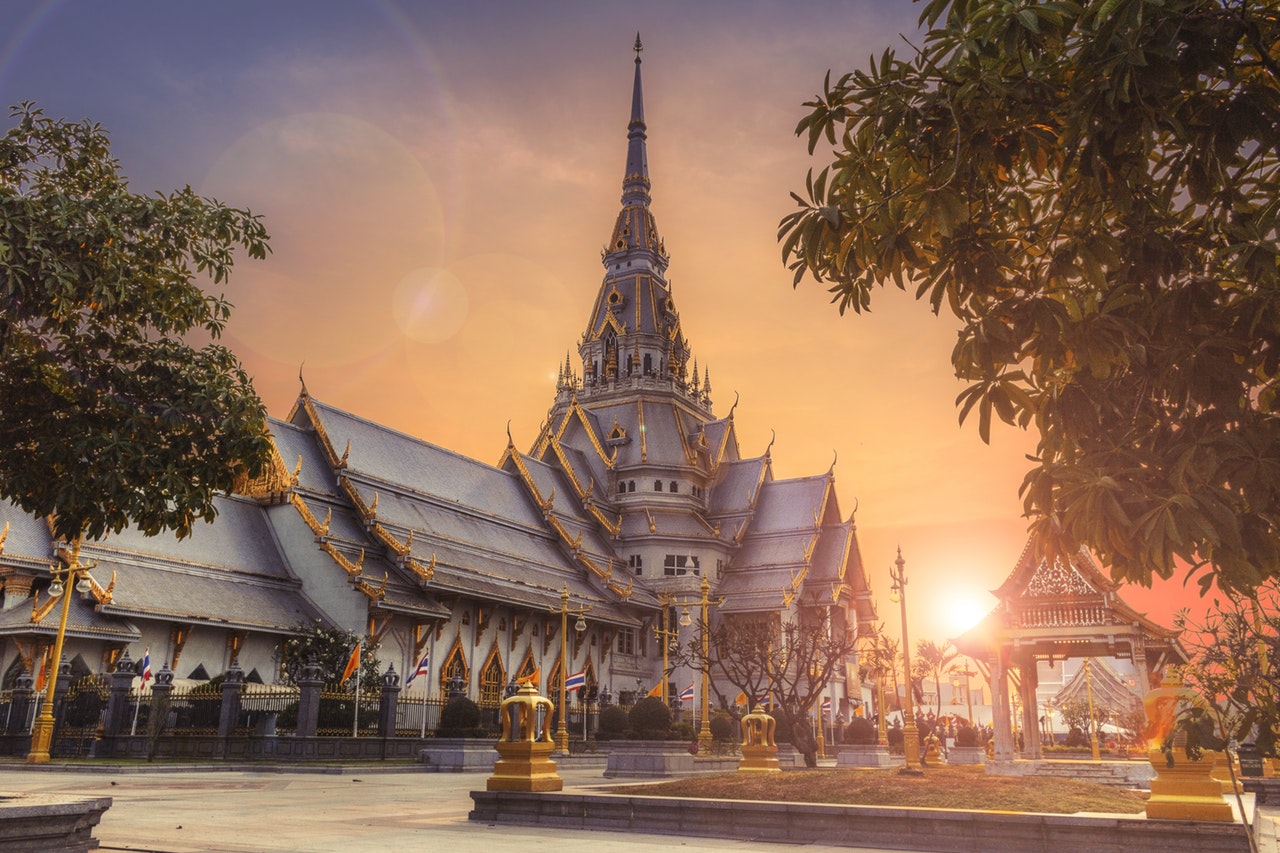 Travel in Thailand is a booming industry. Stellar customer service, beautiful terrains, delicious food, and favorable exchange rates have led to a booming tourism industry throughout Thailand and the rest of Southeast Asia. So much so that the annual visitors to Thailand have doubled in the last decade. However, you don’t want to get caught traveling throughout Thailand during the worst time to visit Thailand—such as monsoon season, or during the hottest months of the year. Before you book your exotic dream vacation, here are our tips for the best time to visit Thailand.

It really depends on the person and their particular tastes to decide what time is the best to visit Thailand, however if you are visiting the idyllic beaches to get a tan, then it is likely that you would want to visit before the monsoon season. The sunniest times to visit are between the end of November and the end of April. Though the monsoon season is between July and October, May and June showers are not unheard of.

When it comes to weather, Thailand’s beaches are best during the winter. Between December and February is when Thailand is the coolest. The slightly drier weather stops problems from the extreme humidity—like sweat rash and heat exhaustion—so that you can actually enjoy laying out under the sun.

You might find slightly chilly weather in the middle of the night if you are north of Bangkok in regions like Chiang Mai. However, this is slightly chilly for a tropical climate. In the majority of the world, the weather will be t-shirt and tank top weather. An evening breeze will help keep you cool after the day’s heat. However, if you are there for an extended time (long enough to get acclimated to the tropical weather), you may want to pack a sweatshirt for late night excursions.

It is wise to remember however that the winter is when the most tourists visit Thailand. You will not be alone. Instead prices can go up slightly, and hostels, bungalows, and hotels are more likely to be booked. If you are looking to have Thailand for yourself, you might want to visit Thailand during monsoon season.

FALL AND WINTER FESTIVALS IN THAILAND:

The Lantern Festival (Yi Peng) in November is one of Thailand’s most famous events. In this festival, thousands of paper lanterns are released into the sky to float away like a sea of lights over the night sky of the Peng River in the northern province of Chiang Mai. This festival is more spiritual and introspective than many of the other festivals in Thailand.

The Buffalo Racing Festival (Wing Kwai) in October is a 100-year-old tradition where a track is set up around Chonburi City Hall, in the province of Chonburi. Crowds line the track as jockeys ride bare-backed on buffaloes along the 100-meter track. You will be amazed at how fast these buffalo can go!

In the city of Lopburi, a central temple which is commonly overrun with a community of monkeys become the focus of this festival. Though they are normally fed with bags of sunflower seeds, in November a grand feast is laid out for them with—literally—tons of fruit, vegetables, and other treats. Come see the grandest simian party and enjoy in the fun of watching these monkeys feast!

Despite the misleading name of Phuket’s largest festival, this October festival is no benign celebration. Instead, locals are often paraded through the streets as they undertake self-mortification with spiked objects or swords—often jutting through their cheeks. These locals will then walk over hot coals. If you are interested in macabre rituals of extreme devotion, then this is the ritual for you!

There is absolutely nothing authentic about this December festival in Pattaya. Instead, this is a standard music festival that can compete with Coachella in the US or Glastonbury in the UK. Leading music acts entertain youths that gather from all around the world to see their favorite bands and rock all night!

Some people might consider monsoon season to be the worst time to visit Thailand, however we should remember that there can be a romance to lounging in a jungle bungalow with the tranquil sounds of rain pummeling the palm fronds. The food will always be delicious and the people will always be friendly and welcoming—any time of the year. In Chiang Mai (in the north), you can expect weather to be wet and chilly because it is a mountainous region. Contrast this with Bangkok, where the air becomes stuffy, and the rain floods the streets with foul smelling garbage and pollution.

THE HOTTEST SEASON IN THAILAND:

The hottest months in Thailand are unbearable. Travelers should avoid Thailand during the months of April and part of May—until the cooling rains arrive. Thailand is hot even in the coldest parts of winter, however it can exceed 104F/40C during the month of April and the beginning of May. With almost 100% humidity, this can vastly increase the heat index making 104F feel like 120F. Mosquitoes thrive in this hot climate, and mosquitoes spread disease. Sweat rashes and other skin conditions can increase. Many tourists are told to bring silica packets in order to store their electronics in a dry place or else the humidity will destroy their phones and computers. Overall, we recommend that you avoid Thailand during April. If you have to go, be sure to investigate what to pack.

SPRING AND SUMMER FESTIVALS IN THAILAND:

There are many festivals in Thailand that could also influence you choosing when you are interested in traveling there. Some of the most famous festivals take place during the spring and summer months:

The Ghost Festival (Phi Ta Khon) is celebrated in the months of June or July (6th full moon of the lunar calendar) in the Dan Sai district of the Loei Province. In this festival, colorful and ghastly masks are worn, paraded throughout the streets. The origin of this festival seems to be a mixture of animist and Buddhist beliefs, and it seems to be a recreation of a legendary party that was so fabulous everyone wanted to attend—whether living or dead.

The Water Festival (Songkran) is one of the most famous festivals in the world. Between the 13th – 15th of April, the whole country parties for three days in the world’s biggest water fight. Singing, drinking, and dancing accompany this exciting event. Though it is in April, we have counted it among the summer festivals because it is during the absolute hottest part of the year, when temperatures can exceed 40C/104F! Great way to cool down!

The Rocket Festival (Boon Bang Fai) is celebrated in the town of Yasothorn during June or July. Prominent among farming communities in north-eastern Thailand, this festival celebrates the coming of the planting season. These elaborately-decorated rockets encourage the gods to send loads of rain for a healthy harvest season later in the year.

The Candle Festival—held in July in the city of Ubon Ratchanthani—is one of Issan’s largest and most prominent festivals. 10 massive wax sculptures crafted by some of the world’s leading artists are paraded through the city on floats. This Buddhist festival incorporates large parties with traditional music, dance, and gourmet cuisine, and it is one of the best ways to experience the true Thai culture in all its glory!

WHEN IS FLYING TO THAILAND THE CHEAPEST:

Everything is very inexpensive in Thailand. Excursions, activities, transportation, meals, and even accommodations are all inexpensive in Thailand. However, there are time when air fare rates increase drastically. There are three factors that are the main causes of increased prices in airfare from Western countries like Canada, Australia, and the U.S. First of all, many expats who live in Thailand fly home for the holidays. This increased demand drives up prices of airfare. Similarly, people take advantage of the holiday season to get away from the monotony of their daily lives to explore exotic lands like Thailand. Other people go to Thailand during the winter to escape frigid weather in their own countries. Lastly, some office workers use the holiday season to travel in order to use the last of their vacation days before the start of the New Year.

There is a brief period during June and July where flights are also expensive because many youths or teachers get summer vacation off and they wish to go and explore the world. Any time outside of summer and the holiday season, and you can find inexpensive flights to Thailand and back. Booking in April or September are your best bets to save hundreds of dollars on your flight to Thailand.

*Photo Credit to The Hammock Hombre. To check out his blog, click here.