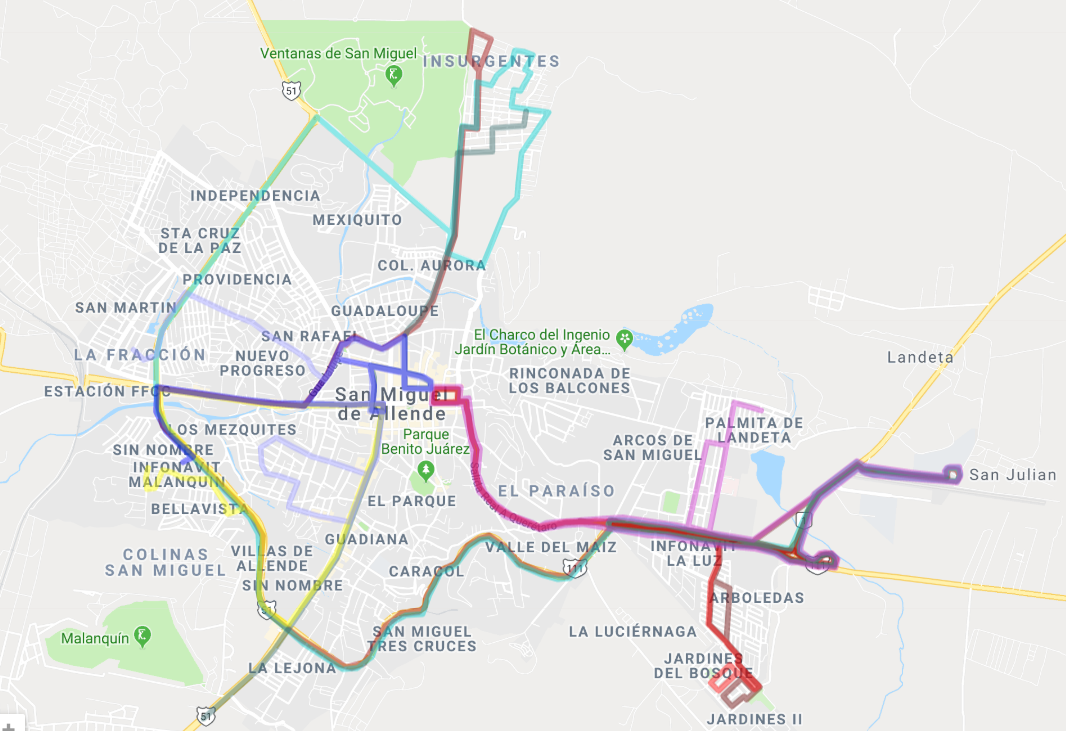 The quality of the buses will have that rustic, Mexican feel that you would expect from bus routes in San Miguel de Allende. It is the mode of transportation that locals use. You can expect workers, school kids, and even musicians playing for a handout.

Bus Routes in San Miguel de Allende – Getting Around:

San Miguel has a decent and reliable bus system when compared with other cities and towns in Mexico. The bus routes in San Miguel de Allende run throughout the town, and they even service many locations on the outskirts of the town.

Buses that travel through San Miguel are called urbanos. Destinations are clearly marked in the bus window or on the side of the bus. Buses are not referred to by a number, but rather their final destination. Often times, these destinations are neighborhoods in San Miguel.

*Note: “Centro” means that the bus’ destination is the center of San Miguel. “Central” means that it will take you to “Central Station” which is the bus station on the outskirts of town.

It costs $8 MXN pesos to ride the bus. Seniors with an INAPAM identification and students with a valid student identification will qualify for a discount. If you do not have exact change, then the bus driver can offer small change for bills. This fare is for a single ride. The bus routes in San Miguel de Allende do not offer transfers.

The buses run from 7:00am – 9:00pm, and they typically arrive within 15 to 20 minutes when you are in the town’s center. If you are arriving from the outskirts of the municipality, the buses can take 1 or even two hours to show up. 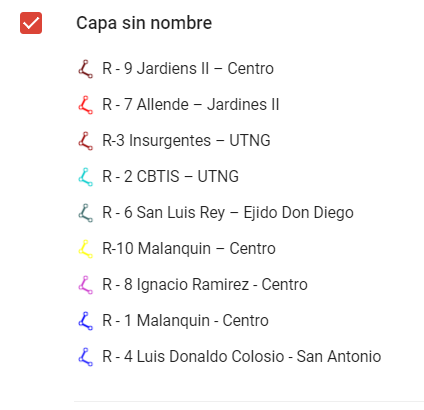 The bus routes in San Miguel de Allende are broken into 9 routes. Each bus route is color-coordinated with a colored stripe indicated along the bus’s side. Also on the bus’s side or in the front window, the destination will be plainly marked indicating in which direction the bus is headed.

This route runs from the skate park in El Malanquin, past the Hospital H+ San Miguel de Allende. It continues up until Lib. Jose Manuel Zavala until it hits Calz. de la Estacion, where it curves toward the Parroquia and Plaza de la Soledad. After criss-crossing the Centro a bit, it returns to the Malanquin.

In one of the longest routes around San Miguel de Allende, this bus runs from El Centro de Bachillerato Tecnologico y de Servicios (CBTis) through the Insurgentes neighborhood before crossing down Lib. Jose Manuel Zavala which naturally curves around the Western end of San Miguel de Allende until it traverses all of southern San Miguel until ending in the San Julian district at the Universidad Tecnologica del Norte de Guanajuato (UTNG-San Miguel).

This bus route in San Miguel runs similarly to route number 2, however it sidesteps the CBTis in favor of crossing through the Centro on Calz. de La Aurora, before ending up at the San Julian district at the Universidad Tecnologica del Norte de Guanajuato (UTNG-San Miguel).

This bus route in San Miguel de Allende is one of the shortest in all of the pueblo. It runs from the La Fraccion neighborhood through the Centro and down toward the San Antonio neighborhood where it circles the neighborhood before returning.

This bus route in San Miguel de Allende runs from Plaza de la Soledad en el Centro, past El Mirador, until it connects with Salida Real A Queretaro. It continues heading west until it reaches the Presidencia Municipal de San Miguel de Allende. Then it dips south to connect the Jardines neighborhoods as it returns to the Centro.

Similar to the #7 bus route in San Miguel, this route connects the Ignacio Ramirea and Palmita de Landeta neighborhoods to the Centro of San Miguel de Allende. From these neighborhoods, it passes by the the San Julian district at the Universidad Tecnologica del Norte de Guanajuato (UTNG-San Miguel). Then it heads south to the Presidencia Municipal de San Miguel de Allende, before taking these passengers to the Plaza de la Soledad.

Similar to the #8 bus route in San Miguel, this route connects the San Julian district at the Universidad Tecnologica del Norte de Guanajuato (UTNG-San Miguel) and the Presidencia Municipal de San Miguel de Allende to the Jardines neighborhoods, before dropping these passengers off in Plaza de la Soledad.