Conversation with an Expat: Brigham Golden

Brigham Golden, known as DJ BGolden to those visiting lively venues in the magical Mexican town of San Miguel de Allende–has been an expat more than once.

“After graduating from college, I wanted to explore the world,” he reminisces with an air of excitement. “I wanted to learn a new language and immerse myself in a new place.”

Soon enough, he landed in Indonesia–where he spent roughly six of the next twelve years working as an activist and cultural anthropologist.

From learning the Indonesian language to engaging in the local culture, he was hooked on the experience of living abroad.

Some years later, he found himself faced with another opportunity to move abroad–but this time, with children. 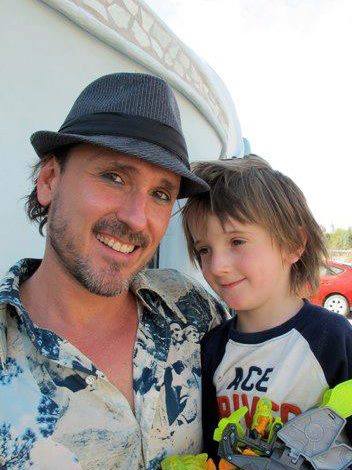 Brigham and his wife, Lynn, originally visited San Miguel after hearing about it through family friends. They quickly fell in love with the high desert colonial town–and even bought two small properties as real estate investments.

However, they continued to work and live in New York City with occasional visits to San Miguel, and it wasn’t until they had children that they decided to make a permanent move to Mexico.

Brigham and Lynn realized that trying to raise kids in New York was going to be a challenge, and “our friends with kids who had lives that seemed the most appealing to us lived down here.”

They originally planned to live in San Miguel for two or three years. However, “we just never left, because we fell in love with it and figured out a way to survive down here and make it work,” he recounts.

Expat Life in Mexico with Kids

“San Miguel de Allende is a great environment for raising my kids,” notes Brigham. “For example, childcare down here is just incredible.”

Brigham’s family has worked with the same family of babysitters since they first came to San Miguel nine years ago.

“One of our babysitter’s sons is my son’s best friend, and that relationship means a lot to me. That’s been beautiful. The way you can weave yourself into Mexico through childcare is amazing and it becomes this window into Mexican culture,” he says.

Brigham and Lynn’s twins children, who are now eight years old, attend cultural events with the sitter’s family–such as the first communion of the family’s neighbor’s son.

“They can enter this super Mexican world that I don’t have access to,” Brigham smiles.

“Raising them here has committed them to knowledge of another culture and another language that is deep in them. It’s in their body and they just absorb it. It will shape who they are in every way.”

“Overall,” he sums up simply, “I feel like my kids have a really special life here.”

“San Miguel has grown so much, and we’re part of this wave of international culture that has helped to make this the supposed number one city in the world,” Brigham says, echoing recent reader polls in magazines like Travel + Leisure.

What is it about Mexican culture that caused him to fall in love with it?

Brigham describes the community vibe that exists in this pueblo culture: “It’s being courteous in the streets, and saying ‘buenas tardes’ or ‘buenas dias’–there’s this common mutual respect. There’s an openness–when you meet someone in the street, you talk to them. There’s a sort of camaraderie.”

Some 15,000 foreigners are part or full-time residents of the town, have also been joined by a growing influx of Mexican artists, entrepreneurs and other cultural creatives from around the country.

“People come here and they are artists. Maybe they weren’t an artist before–but they come here and follow passions. And that’s beautiful.”

“You don’t come here to get ahead,” observes Brigham, drawing a distinction from the United States. “You come here to follow your passions and you listen to your inner self–what’s important to you–and you follow that.”

Which is exactly what Brigham did upon his move to San Miguel.

Though he worked as an academic anthropologist in Indonesia and New York, he made a major life shift to working as a DJ and event producer in San Miguel.

“I found a reorientation of my career interests, but I still see continuity in what I do now and what I did then,” he says. “I used to watch and write about cultural festivals of other people. Now I’m doing it.”

“Mexicans don’t live to work,”Brigham states, drawing a sharp contrast to the work culture of the United States. “This is a huge generalization, but Mexicans work really hard, and when the weekend comes, they are going to enjoy it with their friends and family and celebrate.”

Advice to Other Expats

Brigham strongly encourages others who can live abroad to take the leap like he and Lynn did nine years ago.

“There’s so much deterritorialized work now where you can work online. Sometimes I think that people who could live anywhere and don’t are crazy,” Brigham says shaking his head in amazement. “Like, if you can live anywhere with your job, then live exactly where you want to live.”

And does he face any regrets in his decision to move to San Miguel?

“I literally wouldn’t live anywhere else in the world,” he shares, “this is exactly where I want to be. Once I came down here, it was a much better life, honestly. That’s been a great decision and I’m glad San Miguel was here to be a place for me in this chapter of my life.”

FIND OUT HOW WE CAN HELP INSURE YOUR ADVENTURE ABROAD