Everything You Ever Wanted to Know About Mole—And More!

Articles Everything You Ever Wanted to Know About Mole—And More! 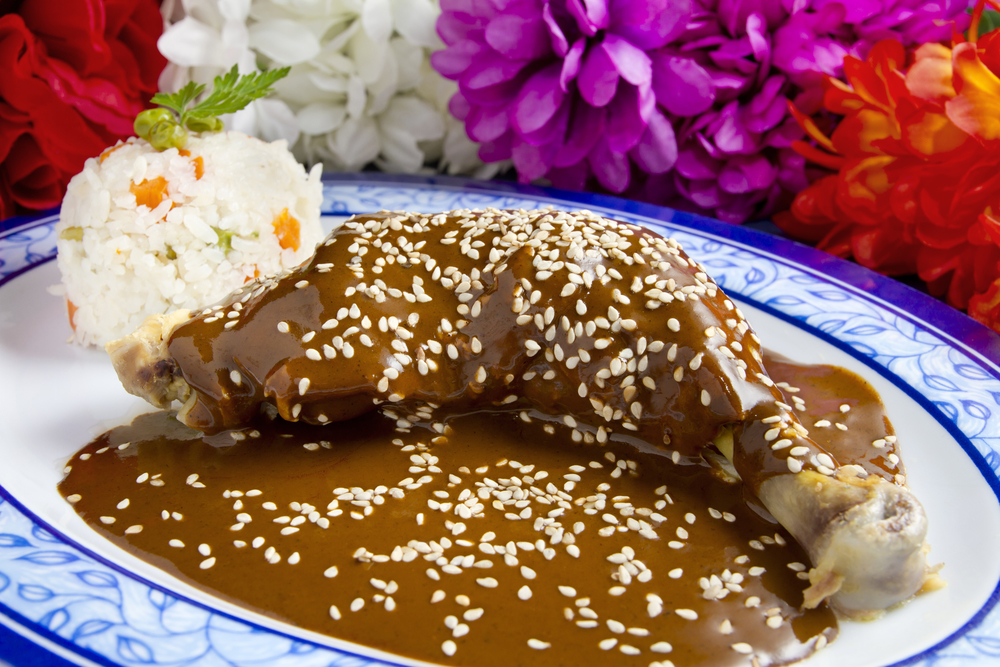 Maybe you’ve seen it on a menu, or spied it being served at a nearby table in a restaurant. Perhaps, you’ve tried mole sauce and loved this savory sauce, however Mexico’s national dish hides a rich history, and it’s as diverse and varied as the regions of Mexico that craft it.

-A Brief History of Mole Sauce-

The birth of mole (pronounced MOH-lay) is steeped in legend. One story says it was first created in Oaxaca, the next says it originated in Puebla. However, the legend typically takes place in a convent, where nuns had to cook for the archbishop or some other religious official. Though they were very poor, the nuns mixed all the ingredients they had, some spices, a little chocolate, and they served it atop a turkey. In other accounts, Fray Pascual was cooking for the viceroy of New Spain when spices were knocked (or were sometimes blown by wind) into a broth. In any tale, the patron loved it and when asked what it was called, a poor nun said, “We made a mole.”

However, the more-likely, historical account seems to be far less serendipitous—instead originating throughout a gradual process over an extended period of time. “Mole” comes from the Nahuatl word mōlli, which literally means “sauce” or “concoction”. There is considerable debate among scholars as to the origin of the word, and whether or not it was imported by the conquistadors, because it does seem to resemble the Portuguese word for sauce: molho. What seems most likely though, is that there was some early form of mole sauce served by the Aztecs before the arrival of the Spaniards.

The earliest Western account of Aztec food is found in Hernán Cortés’—the Mexican _conquistador—_letters home. They provide an illustrated account of the food served. Among these accounts, Cortés describes a sauce made from ground squash seeds served over some foul (likely turkey because chicken is not native to the Americas). This mole sauce is still served today—it is called _pipián—_indicating that this is likely one of the oldest moles in Mexico.

Bernardino de Sahagún’s major treatise General History of the Things of New Spain was written beginning in 1529, only eight years after the conquest ended in 1521_._ Sahagún’s account describes a variety of mollis served over game, fish, and vegetables. Surprisingly though, for all of Sahagún’s meticulously detailed accounts of the lives of the Aztec people, there is not one account of anyone ever cooking with chocolate. When many expats think of mole sauce, they think of the rich, dark, and spicy chocolate sauces typically served over a chicken leg or shredded chicken breast. However, the addition of chocolate to mole sauces does not seem to have occurred until after the Spanish Conquest.

“The idea of using chocolate as a flavoring in cooked food would have been horrifying to the Aztecs—just as Christians could not conceive of using communion wine to make, say, coq au vin. In all the pages of Sahagún that deal with Aztec cuisine and with chocolate, there is not a hint that it ever entered into an Aztec dish. Yet, today many food writers and gourmets consider one particular dish, the famous pavo in mole poblano, which contains chocolate, to represent the pinnacle of the Mexican cooking tradition…the place of origin of the dish and its sauce, the Colonial Puebla de los Angeles; this beautiful city, unlike others in central Mexico, has no Aztec foundations – and neither does the dish, regardless of what food writers may say.” Taken from The True History of Chocolate, Sophie D. Coe and Michael D. Coe [Thames and Hudson: London] 1996 (p. 216-7).

Even today, most mole sauces—except the most intricate moles—have no chocolate in them; and chocolate is not the definitive ingredient in any mole. For the Aztecs, chocolate was almost exclusively ingested as a spicy drink. However in 2012, a team of archaeologists examined a 2,500-year-old plate in the Yucatan, and discovered traces of chocolate which means that there may have been a long-standing tradition of eating dishes with chocolate thousands of years before the Aztec empire existed.

Moles are always complex sauces that can sometimes take days to make, and involve up to dozens of ingredients, meticulously prepared so as to achieve that perfect flavor. They are then combined into a paste or a powder where the cook adds stock to create a sauce. They can be as thick as pie fillings or as thin as a hearty soup, and every consistency in between. Despite their many differences, moles do share some universal qualities. First off, they are all pureed. Secondly, they all contain some form of chile—either dried chiles in powdered form, or fresh chiles as a part of the sauce’s base—though they may not necessarily be spicy. Chiles is an absolute necessity. Some chiles are for smokiness, others are for spice. Some chiles give it color, others can even add sweetness. Finding the exact balance is an art that takes decades to learn. Often chiles are ground in a traditional method on a metate or in a large mortar and pestle called a molcajete.

Another essential are different spices such as: coriander, cumin, clove, cinnamon stick, or all spice. There are often seeds, like ground pumpkin or squash seeds in a pipián, while others have toasted sesame seeds atop the dish. Vegetables like tomatoes and tomatillos are a staple in many moles. They all contain some form of aromatics, such as garlic, onion, or herbs. Some moles have exotic herbs, such as epazote and hoja santa, others have more recognizable herbs such as cilantro, oregano, and thyme. Some sweeter moles use fruits for color and texture—either dried raisins and figs, or fresh apple, guava, or banana can be found in some moles. And many have nuts, such as: peanuts, pine nuts, almonds, pecans, and even walnuts. And finally, they all must have some form of thickener, whether it be tortillas, bread, nuts, or seeds, or any combination of the above.

Mole sauce is typically categorized by color. The most common moles are red, black, and brown moles such as mole prieto of Tlaxcala, mole ranchero of Morelos, mole coloradito from Valle de México, or a different mole coloradito from Oaxaca. Yet, there are lesser known moles, such as: yellow, white, green, and there’s even a pink mole. There is no one recipe for mole, more like broad categories. Every recipe can vary from region to region, town to town, and family to family. I have heard it said of mole: instead of being referred to as a dish, it is best described as a concept.

For the purposes of this description, we will say that this mole can also be called mole poblano. There are of course many other places that make a mole rojo—Michoacán for example. There are also mole poblanos that are browner, or some that are far darker than mole rojo, but as a typical rule of thumb, it can be wise to remember that mole rojos are largely from Puebla. These are made with roughly twenty ingredients, and they are often sweeter than your average mole with a delicate balance of flavors.

Similarly, we will say that this mole is also called mole oaxaqueño. Oaxaca is known for a variety of moles, and not all of them are black. Also, there are moles from Puebla that are just as dark and complex as any mole in Oaxaca—however, we are just offering a good rule to go by. Just be aware, there are exceptions. Mole negro is the most complex mole with 30+ ingredients. It can take days to make, and it is often richer with a slightly-bitter, roasted flavor.

Mole verde is typically from central Mexico, and it generally has less than 20 ingredients. Many mole verdes are synonymous with pipián, however not all mole verdes use squash or pumpkin seeds as a base. Furthermore, some pipián moles are not green, but more of a sandy-beige color—like a mole almendrado which uses almonds as a base. That said, many times mole verde is a form of pipián. It is hardly ever spicy, and instead has a savory flavor which many first-timers find very palatable.

Yellow mole is known in Oaxaca only as amarillito, and it’s one of the most difficult moles to find—even in Oaxaca. One of the seven traditional moles of Oaxaca, it is made with an endangered chile called chilhuacle amarillo, which is mildly spicy and gives this mole its decadent yellow color. Today, a very nice substitute mole is made with chiles guajillo and ancho. The flavor ends up similar, though the mole is a slightly more orange color.

Made with almond, white chocolate, and _chile g__üero—_among other white ingredients—this mole is far sweeter due to the fruit typically added, such as apples, raisins, and banana or plantain. It ends up an elegant white color, and it is served occasionally at weddings, giving it its other name mole de novia.

This mole from the state of Guerrero, is basically an almendrado where the base is made of almonds. It uses chipotle (smoked jalapeño pepper), red onion, and beets to give it a surreal pink color with a mild sweetness. This is perhaps the rarest of all moles.

The most common of all moles, found on all continents and in any Mexican restaurant, is guacamole. This mole is made with very few ingredients, and is hardly ever draped over food, more likely to be served as a condiment on food. We are including it more as a fun-filled fact that it does qualify as a pre-Columbian mole. The word comes to us from the Nahuatl language, as a combination of ahuacatl (avocado) + molli.

There are countless other moles—about fifty altogether—each with their own history. We encourage you to learn about them and their rich history, and to find them and try them!