Guide to Tijuana: An Expats Layover in TJ

Guide to Tijuana: An Expats Layover in TJ 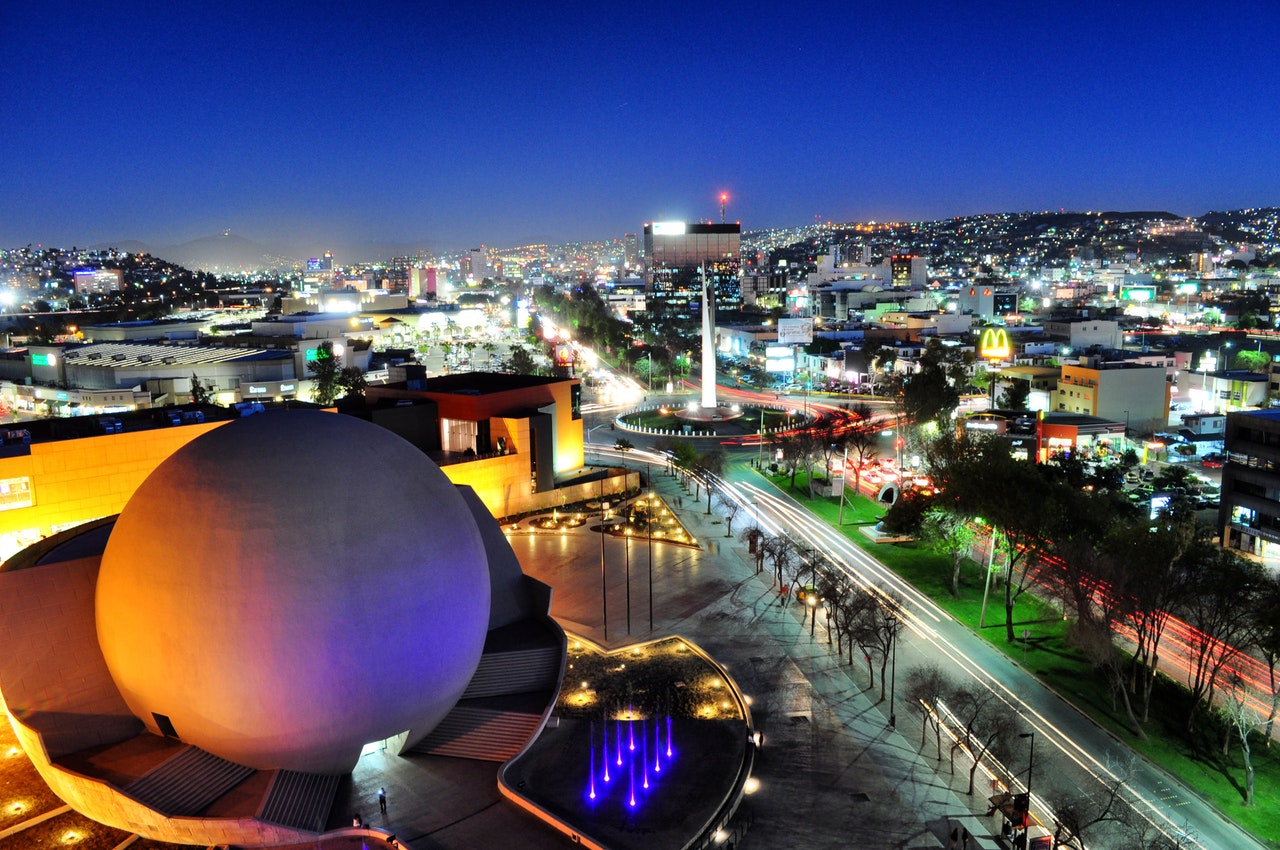 Tijuana, Mexico is becoming a modern city with top-tier attractions.

Chandler Hunt, writing for WeExpats, puts forth his advice for what to do on a long layover when you are taking the Cross-Border Express. Let us know if you agree with his advice on our Facebook page.

An Expat’s Layover in TJ

Many Expats in Mexico that I meet often fly to Tijuana as a simple connecting flight on their way to the San Diego Airport. After all with the new Cross Border Express, why not save $200 on plane tickets. For anyone who does not know what the Cross Border Express is, you are surely missing out.

The Cross Border Express is a border within the Tijuana Airport connecting to San Diego. Instead of landing, leaving the airport and crossing by foot imagine entering the US inside the same terminal the plane had landed. It’s convenient, saves time and only costs around $12.00.

*For more information on the Cross Border Express refer to https://www.crossborderxpress.com/en/)

Let’s be honest, the reputation of Tijuana is not necessarily the best. The first few things that come to mind are cartel violence, sin, and a place that you might have visited during college or on a family trip to San Diego.

If you tell your friends that you’re spending a few days in Tijuana, I guarantee their answers will be “why?” or “you’re joking”? Even when my parents read this article, they will most likely cringe at the simple idea that I was in Tijuana.

However the truth is, Tijuana has much more to offer than just a layover and a place to find trouble. With the city holding almost 2 million people in the metropolitan area, being one of the wealthiest cities in Mexico, and its close relationship with San Diego, then you will most definitely find more than a cheap souvenir.

The next layover you have in Tijuana, I hope you read this article and decide to spend a day or two. Below is a quick guide to places, food, and experiences that I personally enjoyed very much. If you talk to a local, then I’m sure they have better recommendations—but here is a good place to start. 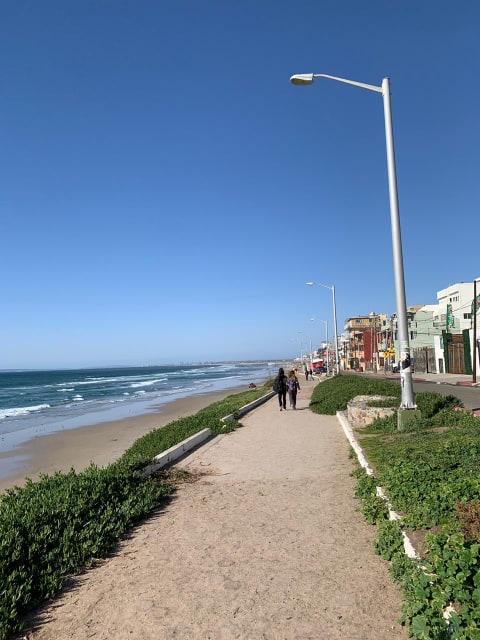 The neighborhood of Playas de Tijuana is reminiscent of Venice Beach.

Guide to Tijuana – Where to Stay in Tijuana:

Tijuana consists of many zones and barrios and that may seem very intimidating at first. If it’s your first time staying in Tijuana, then I personally recommend staying in Playas de Tijuana (known as “Playas” to the locals) and checking out Revolution Street.

Playas de Tijuana is a completely separate part of the city and to get there you must go over a small mountain that separates Playas de Tijuana from the city of Tijuana. You can find AirBnBs that are right on the beach for around $30 USD to $60 USD a night.

Playas de Tijuana also has a large population of Expats that you’ll often run into just walking down the boardwalk. Staying in “Playas” feels like a Mexican Venice Beach with many excellent cafes, restaurant, and bars right on the boardwalk.

Revolution Street is one of the largest touristy streets in Tijuana with many great restaurants and bars. While I don’t recommend staying there, it’s an excellent place to explore and a great introduction to Tijuana.

Guide to Tijuana – Getting Around in Tijuana

Uber works really well in Tijuana and prices are very reasonable. It’s a safe, fast, and affordable way to get between Playas de Tijuana and downtown. 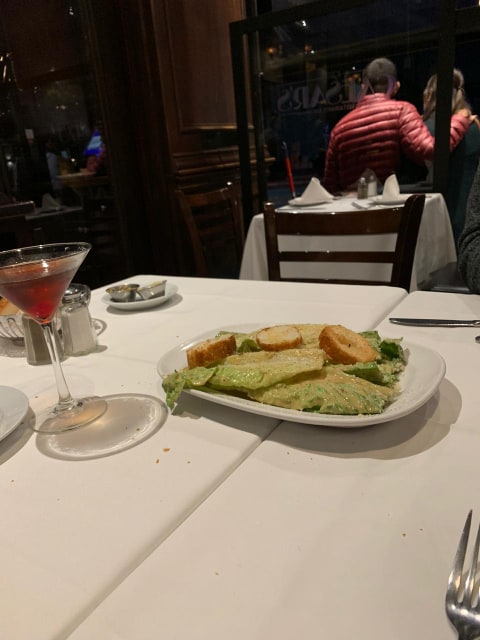 The original Caesar salad , invented in Tijuana in 1924. You can still eat it today.

Guide to Tijuana – Where To Eat & Drink

Tijuana has some amazing restaurants and many will agree that it has the best beer in Mexico. Having the US literally be in plain view from the beach—combined with the close proximity of the ocean and the mix of cultures—make it unlike any other city in North America.

Jalapeños is a small Baja food shack right on the boardwalk. It’s a perfect example of border food, and in my opinion, it has the best California burrito I’ve ever had. For anyone who doesn’t know what a California burrito is, well, it’s a carne asada burrito with french fries and all the fixings.

Aquamarino is a cafe literally right in front of the ocean. They have excellent coffee and a chilaquiles burrito that is like none other. You’ll also find many expats of all ages hanging out there. If you get a chance, introduce yourself and strike up a conversation.

Located on Revolution Street, this famous restaurant is the birthplace of the Caesar salad. It’s relatively inexpensive and overall a fairly good restaurant. Plus, where else can you try the original Caesar salad.

There are two locations for Zebra Bar, one in Playas de Tijuana and the other on Revolution Street. Zebra Bar is a great place to get some artisan draft beer and the overall vibe feels like California. Here you can try some excellent craft beer from all over Northern Baja, California and other parts of Mexico.

This place is a massive gastronomical park located in downtown Tijuana. They have several different food trucks, craft beer they brew on-site, and a wine bar. It feels exactly like you’re in California but half the price and just as good. They even have a free Pac-Man machine that is much harder than meets the eye. 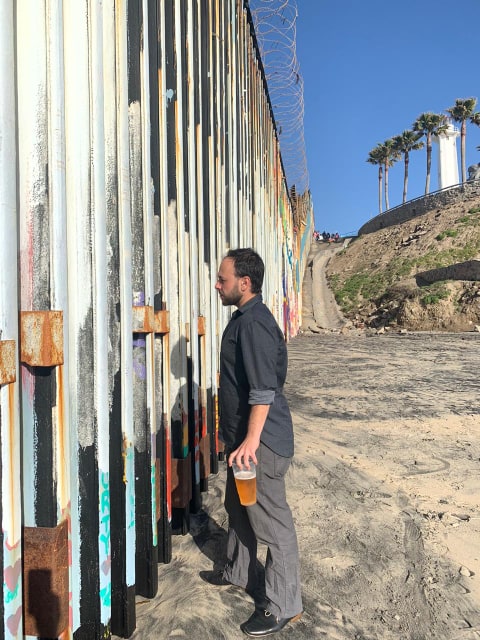 Our dear friend Pedro examining the street murals that adorn the Mexican side of the US-Mexico border wall.

Guide to Tijuana – What To See

Depending on where you’re staying, I highly recommend grabbing a beer from Zebra Bar and walking to the border. You can walk directly up to it as you’re walking North on the boardwalk. It’s decorated with many stunning street art murals.

If you’ve visited Tijuana before, then you might remember Revolution Street as the place you visited in College or a family vacation in California. Let’s just say Revolution street has had some major upgrades in the last twenty years.

Instead of being filled with cheap cantinas (which there still are), it’s now primarily filled with craft taprooms, cafes, and somewhat “hipster” restaurants starting from the Arch called “the gateway to Latin America” at the north end of Revolution street. They continue down all the way, where you can stop to enjoy craft beer, shopping, or food.

Tijuana is also home to an excellent community of artists. Pasaje Rodriguez is an old shopping alleyway converted into a giant art gallery with many local artists selling their work. This alleyway is also a collaborative space and the epicenter for Tijuana’s art scene.

So the next time you have a layover in Tijuana, try extending it a day or two. You might be just as surprised as I was, and I guarantee the city will exceed your expectations. After all, Tijuana is not just a border city, it’s the gateway to Latin America.

*This article was written by our contributor Chandler Hunt