The other day, I took some American friends that were visiting me in Mexico to a restaurant near my house in Cuernavaca. My friend’s girlfriend ordered the trio of quesadillas: huitlacoche con champiñones (mushrooms), flor de calabaza (squash blossoms), and tinga de pollo (chicken in a red sauce). When the waitress brought out the quesadillas, I was mortified to discover that they had no cheese in them! I felt such a stab of shame. They looked at me baffled, and I realized that I had forgotten to explain to them about one of the travesties of my culture: quesadillas in central Mexico don’t always have cheese!

Quesadillas without cheese?!? I had the same thought the first time I heard it too. It seems illogical because it is. The first half of the word quesadilla itself means cheese! However, there’s no getting around the fact that they don’t always have cheese in Central Mexico.

If it’s happened to you, surely you have cut open into that delectable fried morsel only to feel a wave of disappointment as you realize that you have unknowingly ordered a quesadilla without cheese. How could a quesadilla not have cheese?!?

Their argument is: if this is a street stall that sells quesadillas, then everything this street vendor sells must be a “quesadilla”. Some might argue that it’s not a taco because it’s folded in a half-circle shape like an empanada instead of a cylindrical shape. It’s also not an empanada because it’s made with corn flour, not wheat flour.

To them, the term quesadilla then became synonymous with a tortilla folded in half, fried, and pretty much containing anything. Parts of Mexico and Latin America instead refer to this as an empanada—just one made with corn dough.

Referring to a folded and fried tortilla as a quesadilla used to be a class indicator in Mexico City. It was the lower economic classes who—like much of the developing world—depended on street food for their sustenance, and these are the people that began to refer to empanadas as quesadillas.

However, in the last fifty years, referring to an empanada as a quesadilla has become more of a regional dialect than a class indicator. This is hardly the first time that a lower class’ speech infiltrated the upper classes lexicon or vocabulary. It’s quite common. In fact, even Queen Elizabeth’s speech has been becoming less posh since the 1950s.

Since then, several prominent restaurants have begun to put quesadillas without cheese on the menu. This has led to the unfortunate phenomenon of quesadillas bereft of cheese in Central Mexico.

Some articles will tell you that this is a feature only of Mexico City, however, I can assure you that it has spread throughout all of Mexico. I personally have encountered this phenomenon as far north as the town of Dolores Hidalgo and as far south as Puerto Escondido—and that’s just my lived experience. Where I live, in the small city of Cuernavaca, it’s a coin toss as to whether or not you are going to get cheese in your quesadilla. Sadly, quesadillas don’t always have cheese in Central Mexico.

The rest of Mexico uses this oddity in our regional vernacular as a point of ridicule against those that would offer up a quesadilla without cheese. After all, the root of the word quesadilla is the Spanish word for cheese: queso.

Memes have developed in response to this regional oddity. One of my personal favorites is the folded strand of quesillo made to look like ribbon. It says, please share if you are against quesadillas without cheese.

These kinds of divisions are not uncommon in households throughout Central Mexico. It certainly has set a great rift between Mexico City and the rest of the country. And towns like Cuernavaca where I live are on the front lines of these battles. Until one side has emerged the clear victor, just be aware that quesadillas don’t always have cheese in Central Mexico, so if you're a purist, or a queso-phile, just make sure to ask for cheese ahead of time. 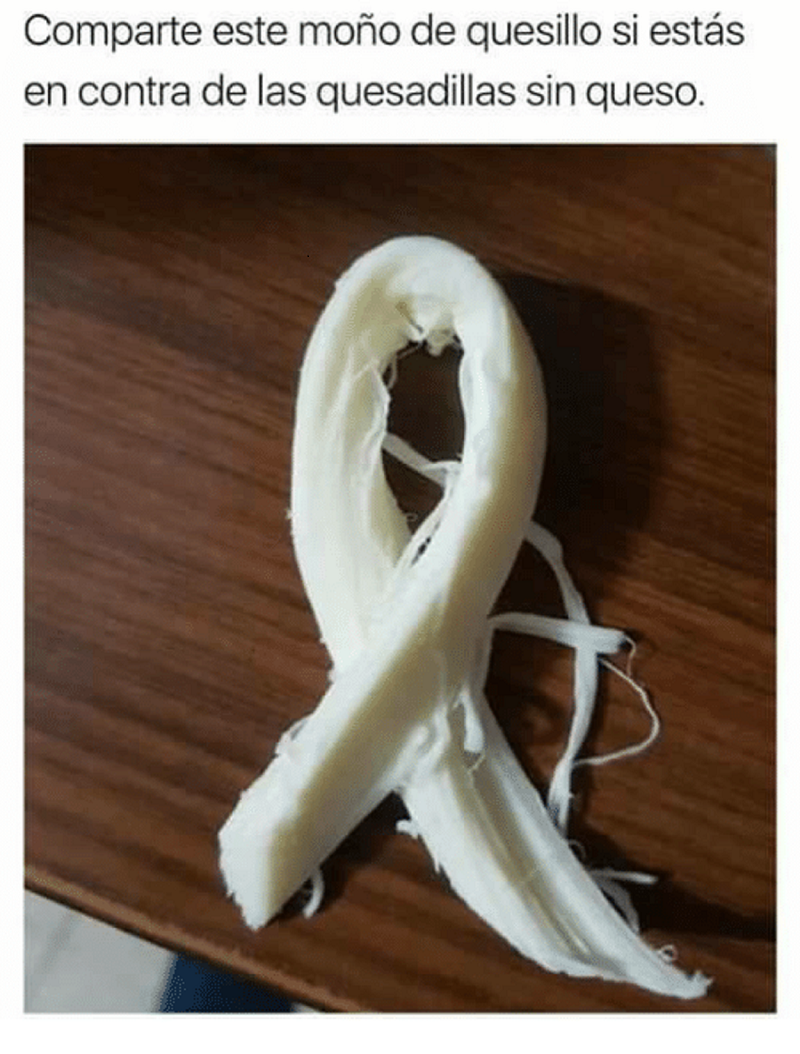