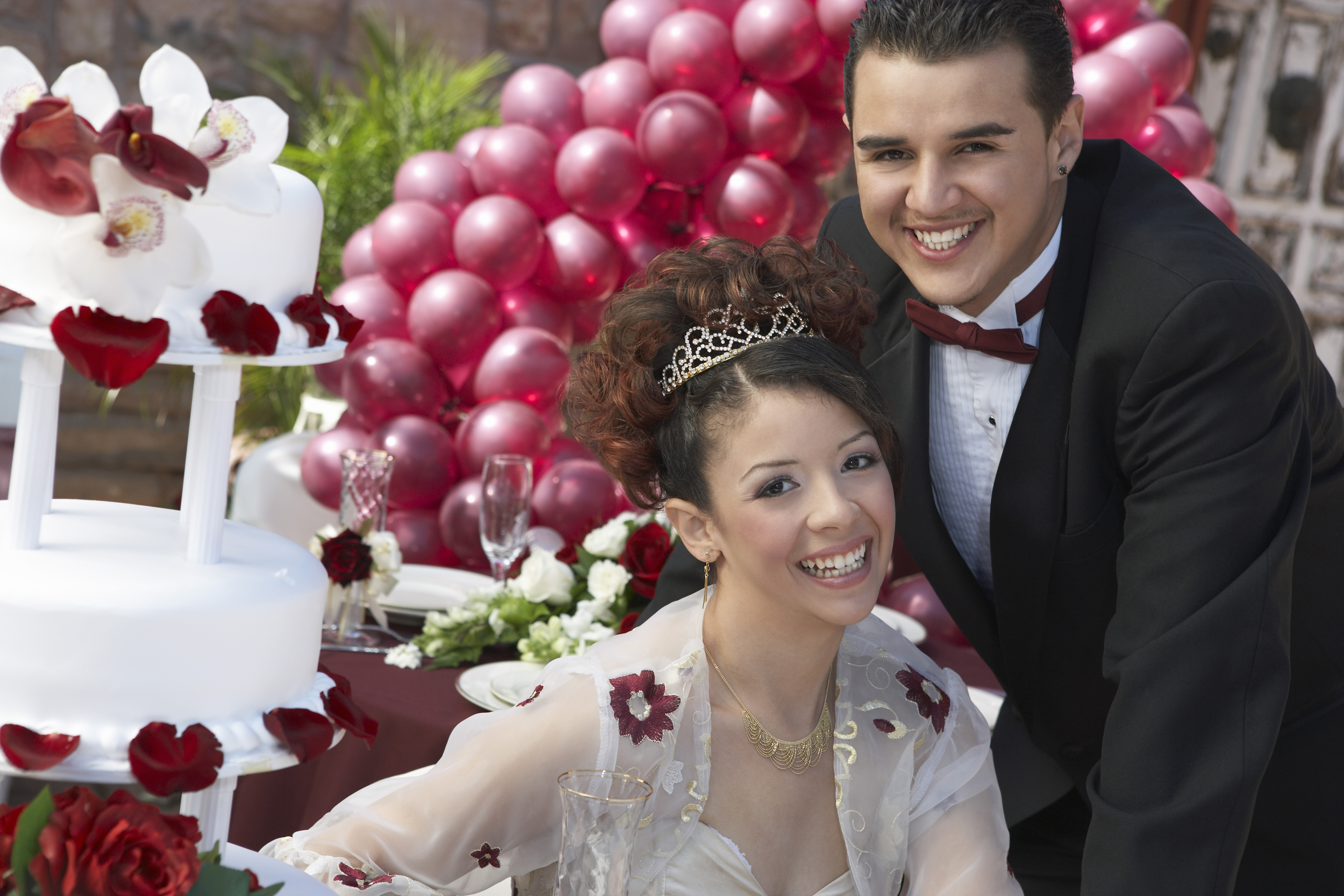 If you have been living in Mexico for a while, then you have likely seen—or perhaps even been invited to—a quinceañera. This Latin American festivity is a lovely tradition, and it’s a wonderful example of Mexican culture. Therefore, WeExpats thought we would do an article on quinceañera history and its practice today.

What is a Quinceañera?

A quinceañera is a Latin American celebration of a girl on her 15th birthday. This is a celebration of a girl entering young womanhood. The word quinceañera comes from a compound of “quince” meaning 15 and “años” meaning year. This is a term most often used to refer to the young lady whose birthday is being celebrated by friend and family—however in English, it often denotes the event itself as well. Quinceañeras are far more formal and ritualistic than perhaps any other birthday because of their steep significance in Latin American culture.

Quinceañera History – Origins of the Quinceañera:

Many historians believe that quinceañeras’ origins stem from Mesoamerican roots. All Prehispanic civilizations from the Toltecs to the Aztecs had some form of ritual signaling a young girl’s transition to womanhood. Indigenous tribes would often teach women skills that were necessary for their future roles in their tribal society, and then on their fifteenth birthday, the young girls would graduate ready for motherhood.

However, celebrations of this nature are a universal—that is to say that they are found throughout cultures and regions on this planet which are separated by distance, time, and language. Similar to a “Sweet 16” in the United States and Canada, or a Bat Mitavah in Judaism, most cultures have some ritual to celebrate a girl’s transition to womanhood.

Parallel customs also existed in Portugal, Spain, and France, therefore the amalgamation of Christian custom and the tribal rite of passage likely flowered into what we call a quinceañera today. Though the customs are celebrated in much of Latin America, it is strongest in Mexico which indicates that it was likely the country where quinceañeras were introduced.

With the arrival of the Spaniards in the 1500s, they were quick to add Catholic elements to the quinceañera celebration. The chief element that they added was a Catholic mass meant to help in the conversion of the indigenous population. Though it is not an official Catholic sacrament, it has nevertheless become an integral part of the tradition stemming around the quinceañera festivity.

*For more information on the quinceañera mass, click here.

Some origin stories attribute quinceañera history to the Dutchess of Alba, who threw a ball at her palace and invited teen girls to attend in formal clothes. This tradition would continue until Empress Carlota threw a similar reception in Mexico—presenting these young women as eligible for marriage.

These celebrations were excuses for more affluent members of the social strata to mingle, and to give a chance for young women to spend time bonding with young men. Such lavish events also served to unite powerful families in marriage ala Game of Thrones. Quinceañeras were even publicized events with articles in the newspaper.

The meaning of the quinceañera changed over the centuries, from being about preparing a young girl for marriage and motherhood, to signaling her flowering into a young woman.

In the beginnings of the 20th Century, the young girl would gain privileges that wouldn’t have normally been accepted as a girl. These privileges include:

In the 1960s, when several Mexicans began moving to the United States, they brought their traditions with them. It became far easier to support themselves making US dollars, and suddenly the common person was able to provide quinceañeras for their daughters. This helped fuel the popularity and prominence of the quinceañera in the United States, Mexico, and abroad 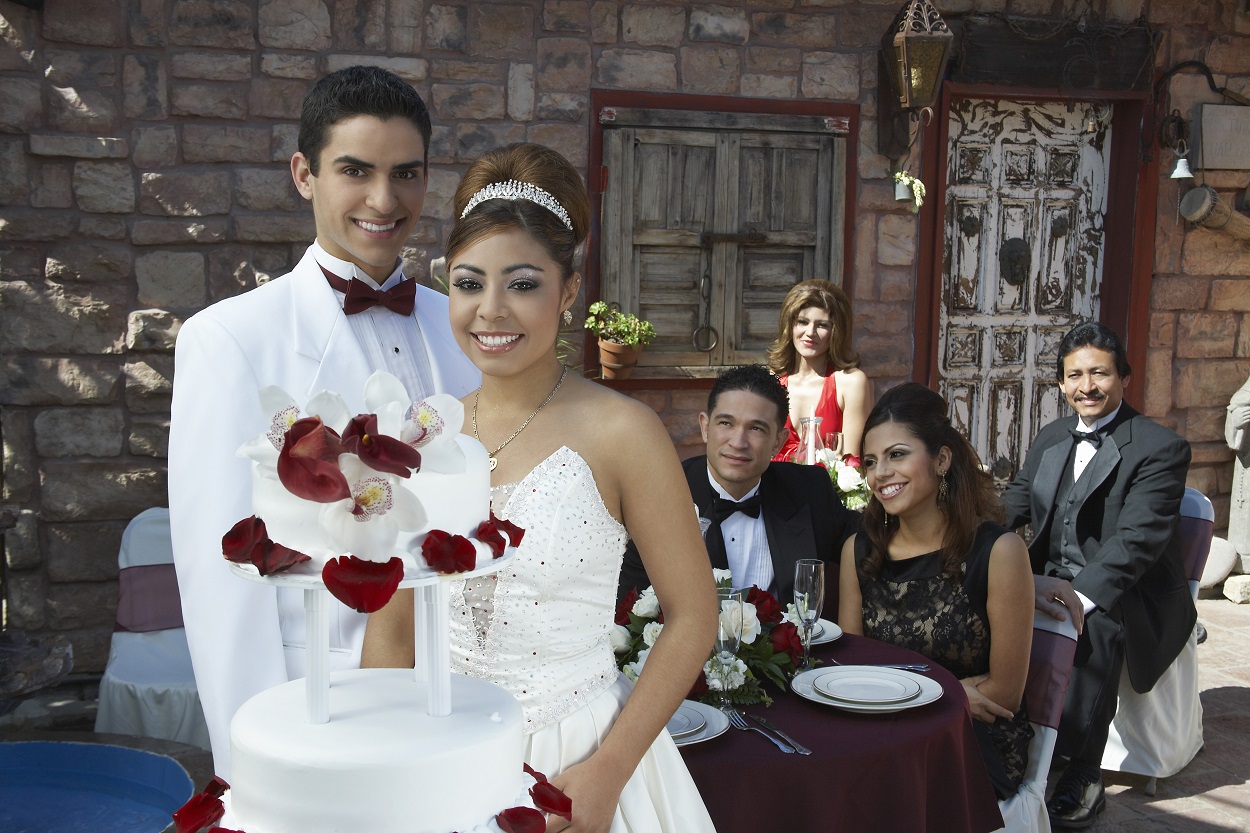 When it comes to the practice of quinceañeras, there are many rituals that likely can trace their roots to the first indigenous rituals in Mexico. Other elements of how quinceañeras are practiced can trace their roots from the Spanish Conquistadores. This melting pot of European and indigenous traditions, which is found throughout all Mexican culture, ends up being paradoxically implicitly unique and yet typical throughout all of Latin America.

The quinceañera will often choose some of her best girl friends to be damas, and her best guy friends to be chambelanes. Tradition holds that the girl will choose 14 girl friends and 14 guy friends, however modern convention has changed this figure to a far more pragmatic 7 damas and 7 chambelanes. The girl—with the help of her family for obvious reasons—also chooses padrinos (or godfathers) to help financially with the event.

The girl and her mother choose a dress that is the girl’s favorite color. In the United States, it is most often white, though, in Mexico, it can be any color—from maroons and royal blues to pastel pinks. One thing that does not change is that the gown is usually a long, elegant ball gown. The quinceañera will also be gifted a tiara and will wear that throughout the entire event. Her damas and chambelanes will typically come color-coordinated to her dress in some fashion.

One male companion will be chosen as the chambelan de honor. This young man will be the quinceañera’s date for the event. However, this young man doesn’t have to be a romantic interest. He can also be an older brother, cousin, or close friend of the family—acting more as a chaperone than a date.

First, the girl has her quinceañera mass, where she reaffirms her commitment to the Catholic faith in front of her friends and loved ones. The girl will take her communion, and then she will likely offer a bouquet of flowers to the Virgin Mary of Guadalupe. In addition, she will be gifted a Catholic trinket that has been blessed by a priest beforehand—like or a rosary or a necklace with a patron saint of Mexico: the Virgin of Guadalupe. For the Catholic mass, the quinceañera will also be gifted a special kneeling pillow for when she bends over to pray. Another particular gift that is bestowed upon her is her “last doll”. Based on a Maya tradition, the last doll is often similar in appearance to the quinceañera and wearing a similar—if not identical—outfit as the quinceañera’s.

After the Catholic mass comes the reception. There are several traditions that take place during the reception which are celebrated depending on the family, their region, their budget, and their particular tastes. Generally, there is a toast where the quinceañera thanks everyone for coming. Another symbolic ritual is when the father removes her slippers and gifts her with her first pair of high heels.

Of course, there is a large meal after all the guests have arrived with live musicians often playing during the meal. Then the first dance takes place. Traditionally, this is a waltz. The quinceañera will begin the dance with her father, and then he will symbolically pass her onto the chambelan de honor who will finish off the waltz. At this time, the rest of the damas and chambelans join in the dancing setting the mood for the rest of the reception. Afterward, it is typical that the reception changes to a DJ.

The following day, some families hold an intimate breakfast, especially for friends and family who have stayed the night to celebrate the quinceañera. Oftentimes, any food that was not consumed at the meal before is reheated.

The quinceañera is a wonderful tradition which is as much for the rest of the family as it is for the young girl whose 15th birthday is being celebrated. The way a young girl is treated after her quinceañera—especially in more conservative households—allows a young girl to begin to wear makeup and high heels, begin acting like a woman, and begin to pursue (albeit innocently) her first experiences with love.

In a way, for those typical Latin American fathers who are so often overprotective of their little girls, it is a bit like Pandora’s box. Once the doors to womanhood have been opened for their daughters, there is no closing it. The quinceañera serves as an event that helps this transition to happen firmly and smoothly.