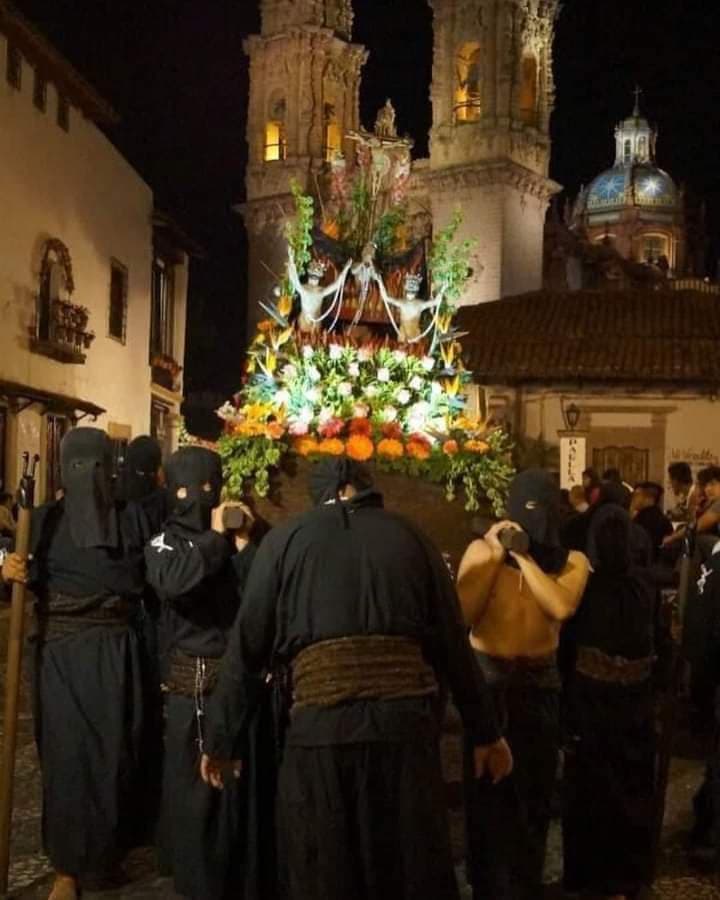 For seven days leading up to Easter, the little colonial pueblo of Taxco de Alarcon in the Mexican state of Guerrero becomes packed with international tourists. All have come to see the bizarre Easter processions—a piece of Late Renaissance culture still alive in Mexico. 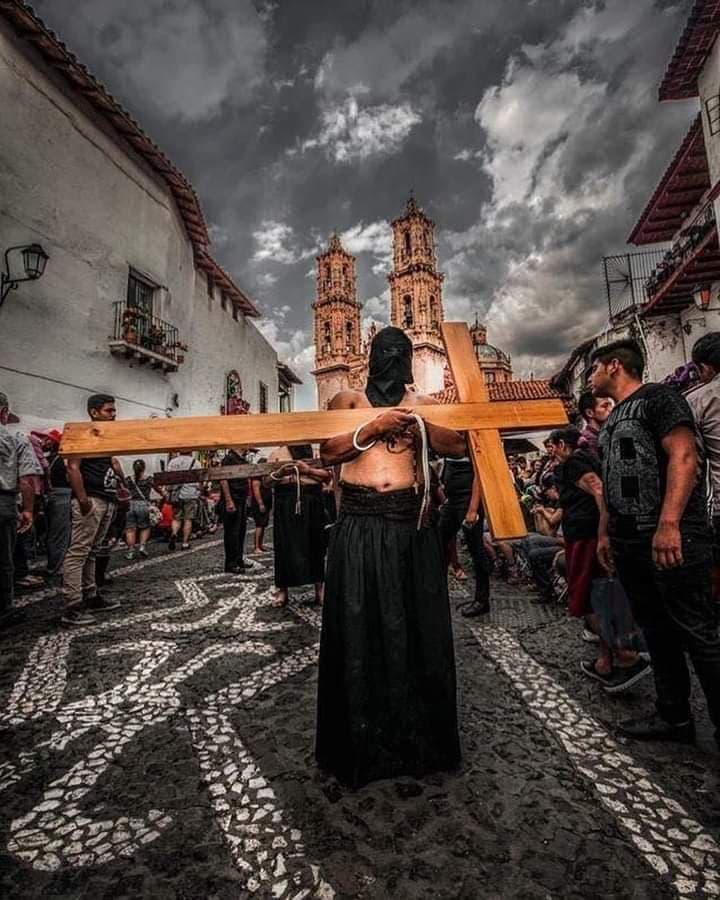 The Easter processions start on Palm Sunday in the outlying town of Tlamacazapa. There, vendors sell palm leaves woven into designs of a crucified Christ—as well as other images that are less haunting.

At the same time, a wooden Christ is mounted atop a donkey and leaves another nearby village: Tehuilotepec. Children on bicycles dressed as angels and adorned with flowers lead this procession. Followed by drummers and people dressed as the apostles—typically walking barefoot.

Then comes the sculpture of Christ. Throngs of believers crowd the figure in hopes of being sprinkled with holy water by priests on the journey. These processions now end at the Santa Prisca Church—the incredible example of churrigueresque architecture in the center square of Taxco de Alarcon.

As Good Friday approaches, the processions become more morbid. Monday, Tuesday, and Wednesday are dedicated to different rituals of penance—each run by their own brotherhood of penitentes. The grueling feats the believers endure is thought to grant them miracles, such as healing incurable diseases and the like.

Thursday is dedicated to the Garden of Gethsemane, where laurel branches and flowers are festooned about the front atrium of the Church of Santa Prisca. Men dressed as Roman soldiers break the garden’s peace—reenacting them looking for Jesus. One local is dressed as Judas Iscariot, who roams the streets rattling a bundle with 30 pieces of silver.

At this time, the Jesus statue amid flowers is replaced by a statue of a blindfolded Jesus with his hands bound behind his back. This statue is “captured”, and the local penitentes and “Roman soldiers* watch over the Christ statue all night, as they rattle metal chains.

Finally, on Good Friday, the second Jesus statue is taken from jail back to the Santa Prisca Church to reenact the Crucifixion. As penitentes gather to enact their macabre rituals, the statue of Christ is crucified before the town square. The now-crucified statue is taken down, and the tone of the processions becomes solemn as their statue of Christ is taken for a sacred burial. This solemn tone carries through Saturday, when one is encouraged to reflect upon the crucifixion of Jesus Christ.

Then, late Saturday evening, the original Christ statue is taken out of “sacred interment” and brought back to the Church of Santa Prisca. There, the locals dressed as Roman soldiers kneel as believers before the Resurrected Jesus, symbolizing Rome’s conversion to Catholicism. At this time, they hold the Mass of the Resurrection on Saturday night.

Sunday is generally spent with family and friends recovering from the busy week before. 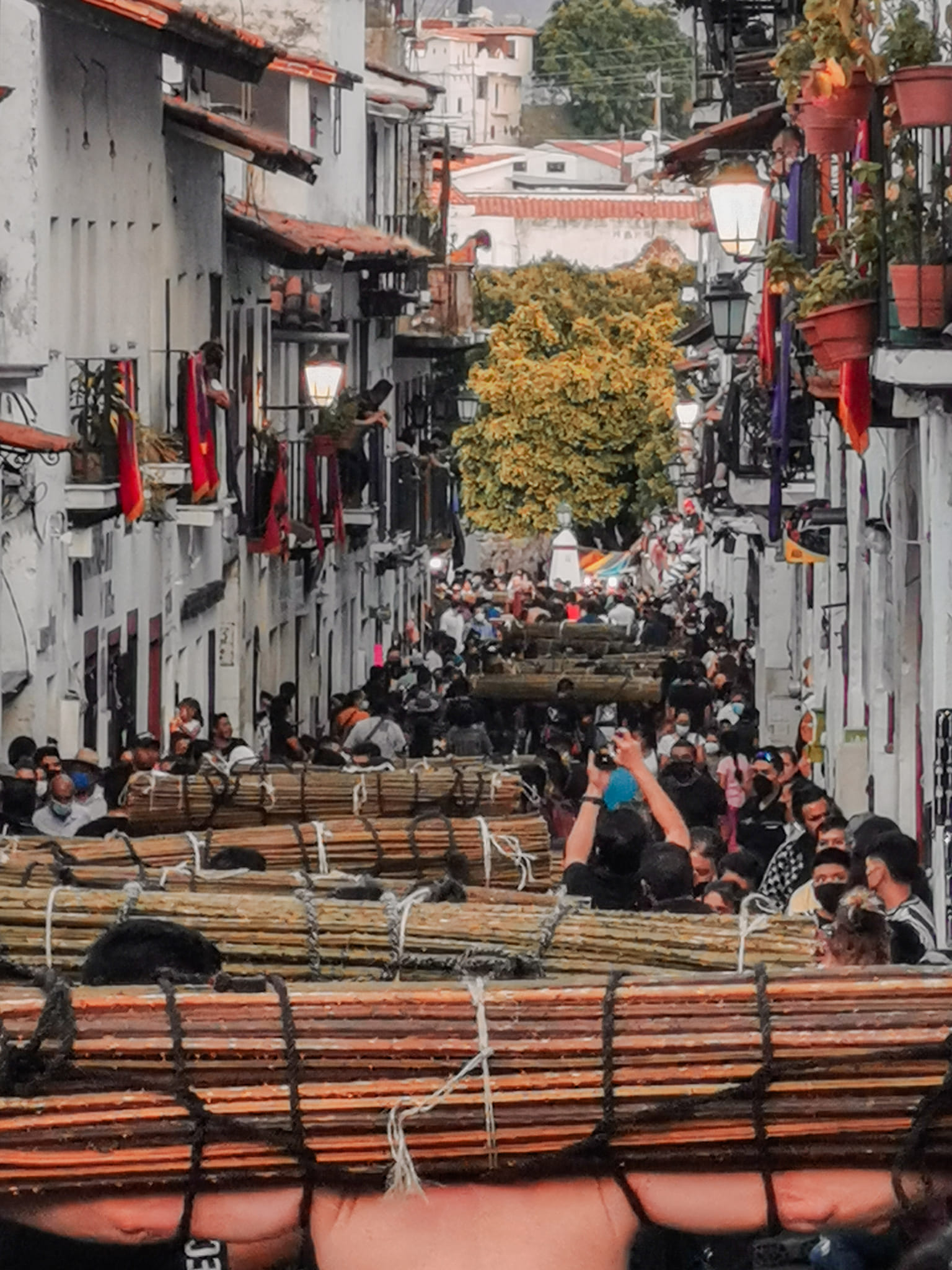 There is historical evidence that these processions and reenactments have been held in Taxco de Alarcon as early as 1622 (400 years ago). Back then, they weren’t held at the Santa Prisca Church, but instead at the Monastery of San Bernardino de Siena.

These traditions were brought to Mexico from Spain—where similar reenactments and processions continue—by the conquistadores roughly 500 years ago. These gruesome rituals became very popular in Central Mexico because they were similar to Aztec blood rites—thus the indigenous population readily adopted the practices.

Over the centuries, several institutions—including the Mexican government and the Catholic Church itself—have tried to put a stop to these types of processions in Mexico. However, in Taxco de Alarcon, they not only survived, but have continued to thrive. 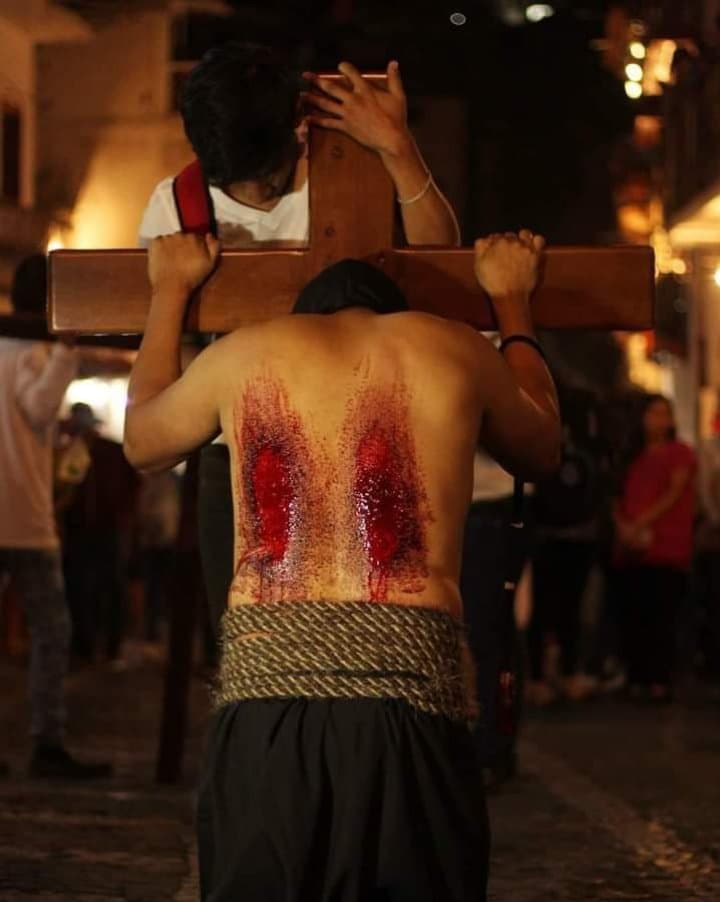 The Main Types of Penitentes in Taxco de Alarcon

There are three main types of penitentes, or those who are enacting the rituals seen throughout the photos. Statues of these three types of penitentes are found outside the old convent, where the processions ended hundreds of years ago.

They all have their own brotherhoods, called “cofradias”, and all wear black hoods covering their faces. They also go either shirtless or bound in black robes, and all garments are cinched with horse hair.

The Encruzados are those pictured carrying bundles of blackberry canes—and sometimes lit candles in each hand. These bundles have been strapped to their bodies, and they can weigh about 100 pounds or more! The thorns stab into their arms and backs, as they make their way for 1.5 miles carrying the enormous weight. Their only respite occurs when they stop their arduous hike, and bystanders help them by holding up the burden for a time.

The Animas have their ankles shackled as they walk the procession, and they hobble stooped over. Sometimes, they carry wooden crosses, but other times they hold lit candles that drip wax onto their exposed hands as they walk. They get no respite from the bent position for the two hour procession—in effect causing a horrendous pain in the backs. This is the only cofradia that permits women members.

Because they must always face the ground, they have guides that help direct them to the Church of the Santa Prisca.

The Flagelantes carry rosaries and large wooden crosses which can weigh 100 pounds as well! They also have a whip with metal barbs at the end. At periodic points throughout the procession, they kneel and strap their backs with the whips, alternating on each side, which dig into their flesh in two bloody areas. 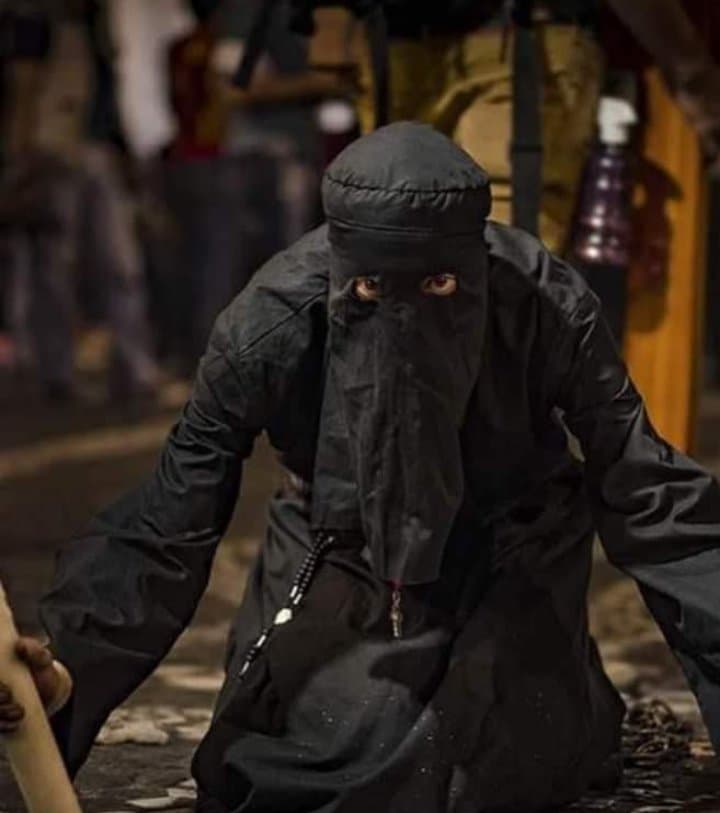 Though you might agree or disagree with these practices, they are nonetheless a deeply ingrained part of the culture of Taxco de Alarcon. For hundreds of years, penitent men and women have tried to empathize with Christ through their own personal suffering and the mortification of their flesh.

Just another way that history is still alive in Mexico.