Articles Chiquitibum: How A Model Popularized Mexico’s Most Famous Cheer 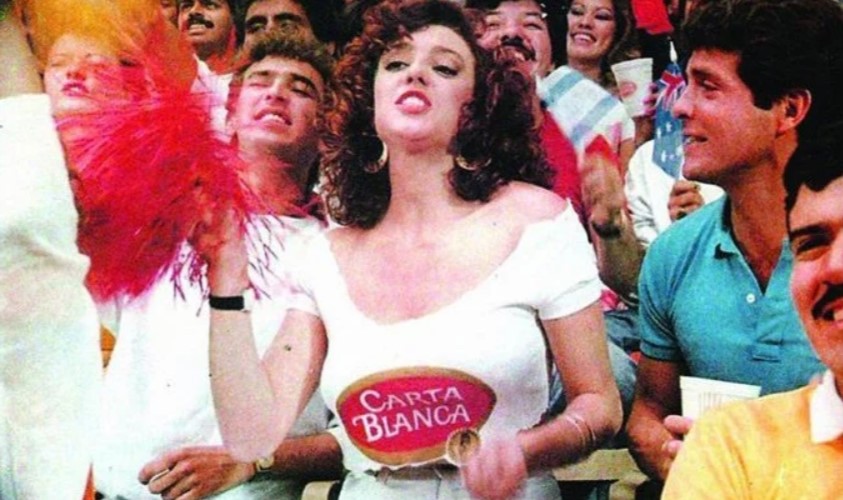 How A Model Popularized Mexico’s Most Famous Cheer

Maybe you’ve seen it at a Mexican football game or on Mexican television, but Mexico’s famous cheer has a surprisingly quirky history and an origin that is steeped in legend. In case you have never heard it, it goes like this:

Of course, if you are watching a Mexican football match, then in place of Mexico you would say the name of your Mexican team. It can be used in several different instances. During the Netflix documentary 1994 (about the political turmoil in Mexico during 1994), they show clips of the people chanting:

Therefore, it can be said that Chiquitibum is appropriate in any sort of competition—not only in a sports context. However, the origin of this Mexican cheer is clearly from football (soccer).

The Origin of Mexico’s Cheer

As the legend goes, at that point, Mexico was lacking its own national cheer. All the cheers were rehashing of English and American cheers, such as “Hip Hip Hooray!” Some of these were brought over directly from the Cornish miners who introduced football to Mexico.

The story is steeped in myth, however it follows that a footballer named Carlos Garcés spurred the birth of Mexico’s cheer. After El América won the national league, they were on a train to Guatemala for a game when they decided to create a Mexican cheer. Carlos noticed the sound the train makes and crafted an onomatopoeia for the sound: Shi-ki-ti, shi-ki-ti. . .

The whole team became involved in creating the Mexican cheer, and soon enough they had a basic rhythm:

Over the years, as legend has it, the B-section containing the other part was added:

In addition, as the decades passed, Shikitibum eventually changed to Chiquitibum, and the Mexican cheer was born.

How a Model in 1986 Popularized Mexico’s Cheer:

Chiquitibum would continue to grow as a Mexican phenomenon, however, it wasn’t until Mexico hosted the 1986 World Cup that it would be popularized throughout the world. It all happened through a quirk of fate.

During the 1986 World Cup, A popular Mexican beer company called Carta Blanca released a commercial with the Chiquitibum cheer in the background. In only a couple of scenes, among a massive crowd, a buxom model grabbed the world’s attention through the provocative manner in which she danced. Overnight, this Spanish model from Málaga—named Mar Castro—became a global sensation.

Mar Castro came to be known as the La Chica Chiquitibum, and it launched her to her 15 minutes of fame—to levels which we could all hope to attain if we should ever be graced with such a moment. She says, “Doing that commercial changed my life.”

She would end up traveling with Carta Blanca to help promote the brewery—completely sponsored by the brewery. Afterward, she moved to Los Angeles to study and pursue a career in acting. She found smalls roles in a few movies—the most famous being Love and Basketball. She settled in Los Angeles directing a production house, all while working on her true passion: poetry. In addition, she would form a band called Azul, Selah, y El Chicano where she would sing as the lead singer.

And through her 15 minutes of fame, she would bring the focus of the world’s eye onto Mexico’s cheer. Chiquitibum would come to be known throughout the world, not only as emblematic in Mexico.

Even today, that commercial continues to associate Carta Blanca with the Chiquitibum cheer. As recently as 2018, Carta Blanca released a type of “reboot” of the commercial, with a new buxom model dancing to the Mexican cheer Chiquitibum.