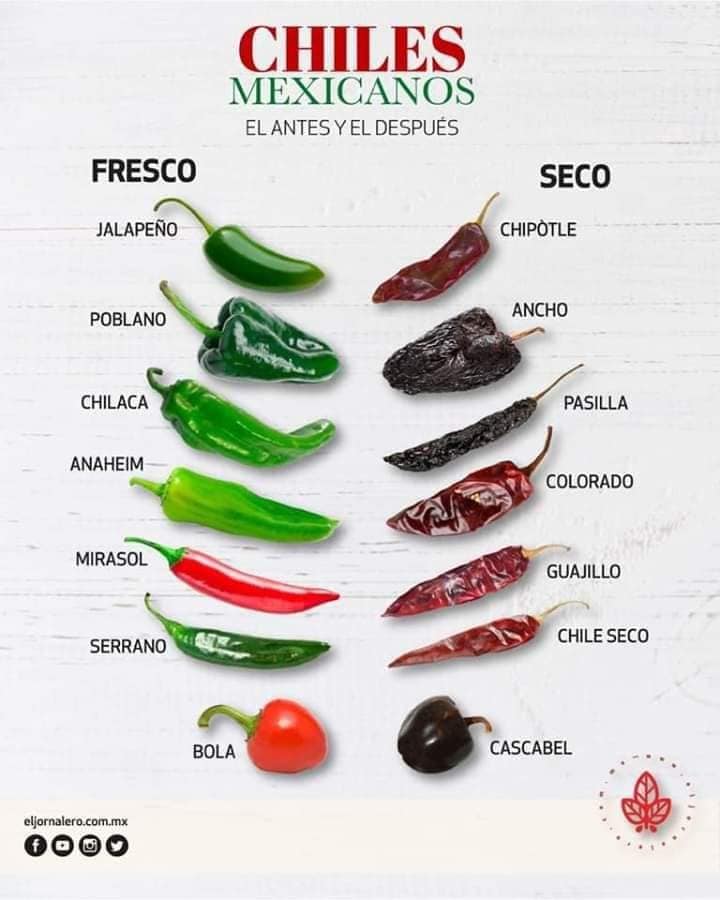 You may be familiar with the different types of chillies In Mexico, but did you know that when a chili pepper is dried, the name changes? Many Mexicans aren’t aware of this fact.

These smoked peppers are often reconstituted with water, and then used to make the salsa rancheras that are so reminiscent of northern Mexican cuisine. Whereas, the fresh versions are more typical of southern salsas.

In this article, we aim to break down the differences between fresh chillies and dried chilies in Mexico. We’ll cover the basics of how Chiliesare cured, which chillies are commonly dried, and by the end of it, you’ll likely know more than the average Mexican.

When we say fresh chiles, we mean the green chili peppers as they come off the bush—though they aren’t all green. In Spanish, they are called “chile fresco”, which means “fresh chiles”. Thus, for the purpose of this article, we’ll just call them as such.

When we think of fresh green chiles, the first pepper to come to mind is undoubtedly either chile serrano or chile jalapeño, however, there are several fresh peppers used in Mexican cuisine. From the common chile poblano used to make rajas or chile relleno, to the rare chilhuacle amarillo, used in the painstaking crafting of the Oaxacan mole amarillito.

Other peppers, like habaneros change colors from green to yellow/orange, and finally to red as their life cycle reaches maturity. Each stage imparts the food with their own distinct flavors. A green habanero tastes different from a reddish habanero that has been forgotten on the vine.

First, the best pepper to use is one that’s turned red on the vine. In fact, the entire smoking process probably began as a way to preserve crops that would otherwise have rotted on the vine.

The aged peppers are then smoked in a smoker for roughly 3 hours. Pecan wood is the traditional Mexican wood used when smoking chili peppers. In Spanish, it’s called “madera de nuez”.

After the smoking process, the chili peppers were traditionally hung to dry in the sun. Today, massive dehydrators are used in the commercial production of dried chiles. That said, you can make your own dried chilies at home by putting them in the oven at the lowest temperature (200 F) for 10 hours.

Lastly, some peppers are cured in an adobo sauce after they have dried. This gives them a unique flavor that is distinct from the dried pepper. The classic example of this is the chipotle pepper, which usually is purchased in cans of chipotle peppers left to marinade in a spicy, flavorful adobo sauce.

Dried chilies in Mexico are given a different name than their fresh counterparts—but they are the same chili pepper. Some Mexicans know this, but few know the actual green chilies that correspond to their dried equivalent.

The good news is that you’re going to walk away with a passing familiarity by the time you’re done with this article. Here are some of the most common fresh chili peppers with their dried equivalents:

Whether you like the smoky salsas and marinades from dried chilies, or the fresh, green peppers picked right from the vine, there are a variety of chilies for any palate in Mexico.