To better understand the region of Baja California better, and in particular La Paz, we thought a basic overview of the history of the area would be helpful. (If you’re interested in the restaurant and bar guide to La Paz, scroll down to the next section). 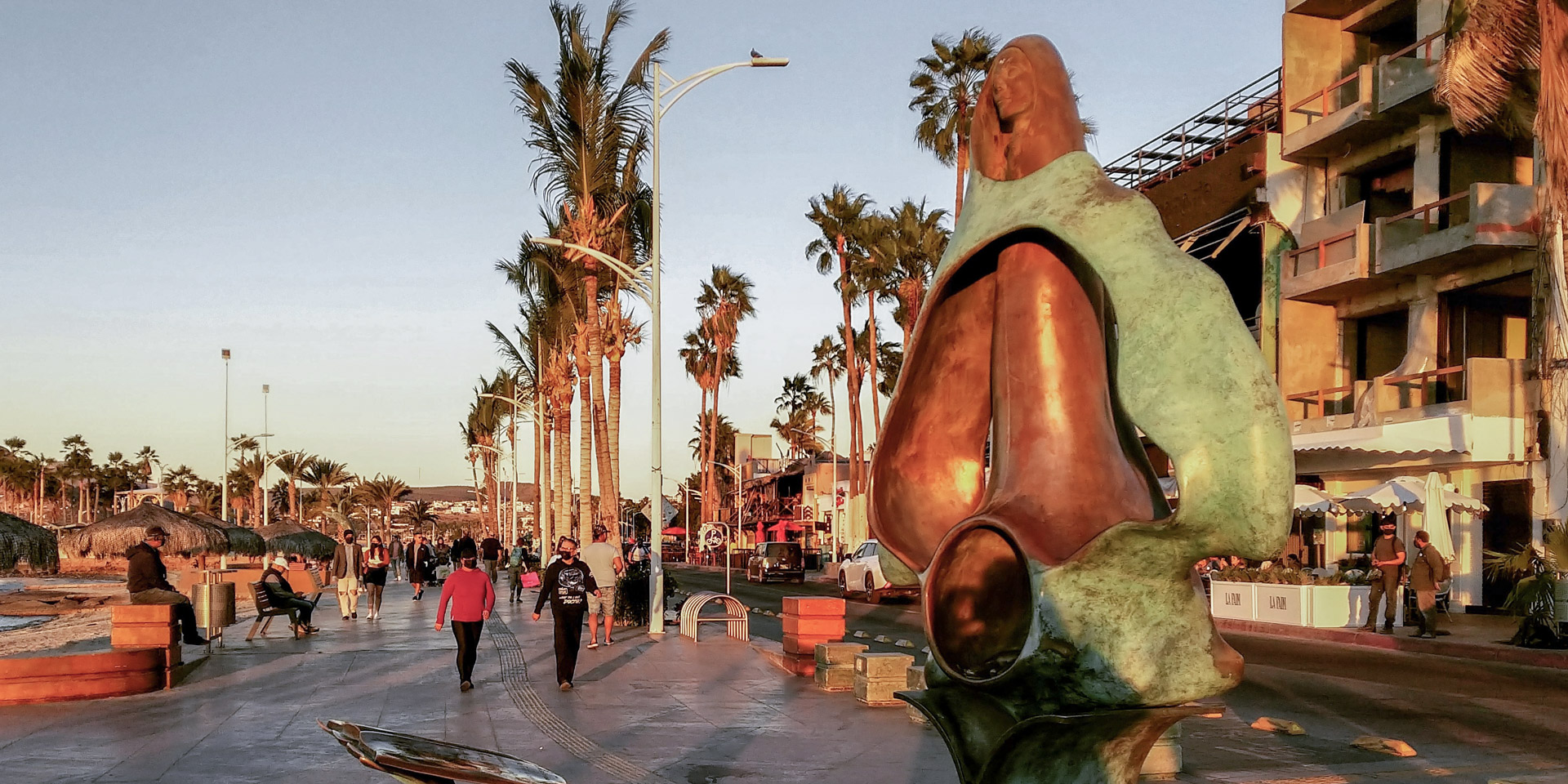 The first known evidence of a human presence in the region of La Paz comes to us—not from history, but from archaeology. Archaeological digs have suggested that the first to arrive on the Baja Peninsula were nomadic hunter/gatherers roughly fourteen thousand years ago (12,000 B.C.E.).

Three people classically inhabited the Baja California Peninsula before the arrival of the Spaniards. The Cochimíes to the north, the Guaycuras in the center, and the Pericúes to the south. The Pericú people occupied the land that would eventually become known as La Paz.

On the actual site of the city of La Paz, native burials have been uncovered which have shed light on the funeral rites of the Pericú. To date, the most important archaeological site in the city of La Paz is called El Conchalito.

With evidence of human settlement stretching back three thousand years (1,000 B.C.E.), El Conchalito gets its name from the multitude of discarded seashells that have allowed archaeologists to set a timeline for human civilization in the area. You can visit El Conchalito today, although it’s just a beach without a touristic archaeological ruin.

*You can visit El Conchalito beach. Click here to find it on Google Maps.

The first Spaniard explorer to discover the site of La Paz was a pilot and navigator named Fortún Jiménez on the ship Concepción in 1535—part of a two-ship team sent by Hernan Cortes in 1533 to chart the Pacific Ocean. The ships were separated and Concepción was lost somewhere in the Gulf of California.

After mutinying on the ship, killing the captain, and stranding any followers the captain may have had, Fortún Jiménez set about exploring and looting the Baja Peninsula. He originally thought it was an island. These Spanish brigands accosted the native women and were attacked by the indigenous people, who killed Jiménez and chased off any surviving sailors.

Cortes, who had funded the two-ship expedition, was unsatisfied with the lack of tangible results. Thus, he decided to lead a third expedition himself. He is officially credited as having discovered La Paz, and he named it Bahia de la Santa Cruz.

Failed attempts to colonize the bay led Cortes to abandon the expedition and head back to his stronghold in the heart of New Spain with the goal of resupplying settlers to take the peninsula.

A writer at the time, who is referred to as Alarcón, decided to spin this event as part of a smear campaign against Hernan Cortes. As a stab against the Spanish conquistador, Alarcón named the region “California”, which was a mythic paradise in a popular novel at the time named Las Sergas de Esplandián. (The word itself “California” referred to the garden paradise of the caliph.)

There are lots of quaint restaurants in La Paz that serve great food. Some establishments focus on using fresh ingredients to prepare healthy meals that could easily be found in the cafes of Los Angeles.

However, they aren’t all chic, farmer’s-market restaurants in La Paz. You can also find dive eateries that serve the greasy delights many have come to associate with northern Mexican cuisine. In addition, the city also has a thriving street food scene.

The following are some options for breakfasts in La Paz, Baja California Sur. However, you can also find great restaurants that serve breakfast in the following “Lunch and Dinner in La Paz” section.

La Mentita is a wonderful little restaurant that serves some of the best breakfasts in La Paz. This restaurant has large portions of healthy takes on Mexican classic breakfasts—generally accompanied by a side salad. Try the huevos rancheros; they’re not on the menu.

For those more adventurous eaters, I can’t recommend this small birria street food stall enough. I was introduced to this Birria street food stand in La Paz by a taxi driver who said it was the best birria he’d ever had. I can attest, it’s delicious. I ate there often.

They are open at 9am—except Tuesdays when they close—and they go until they run out of food (which doesn’t take long). That’s why I’m adding it to the breakfasts in La Paz. The quesabirrias sell the quickest. So if you’re looking for a local hit, show up early for the birria quesadillas.

Doce Cuarenta is a coffee shop that’s open all day and into the night. However, it seems proper to include this establishment in the breakfast category—mainly because it’s also a very good bakery. You can get a simple breakfast here (like a Starbucks breakfast, but made with heart and locally sourced ingredients).

Mostly, Doce Cuarenta is a lodestone to locals and tourists alike, and you can get a great cup of coffee here.

There are lots of options for amazing meals in La Paz, BCS. The following section focuses on restaurants that open early in the morning and close late at night, so you can catch them when you’re ready.

This place is practically an institution in La Paz, Baja California Sur. It features amazing food at very reasonable prices. For a couple of dollars, you can get a huge taco—on your choice of corn or flour tortillas—piled high with all the toppings and salsas that you want.

That’s because, at Claros Fish Jr., you’re served the pure taco, and then you can add the fixings at a salsa bar featuring a myriad of condiments, toppings, slaws, and salsas.

El Azteca serves comfort food from 7:00am until late at night. With reasonable prices and decently sized portions, this restaurant stands out for its stellar service. Also, it has really great milkshakes!

Bismarkcito is a very well-known restaurant situated right on the Malecon boardwalk. It’s one of the top locations for mariscos (seafood), which is the specialty cuisine of La Paz. With incredibly fresh shellfish and top-tier service, Bismarkcito is a must-see in La Paz, BCS.

This restaurant is more of a dinner establishment/late-night eatery—opening at 5pm and closing at 1am. It serves incredible Italian food, namely crispy-crust, artisan pizzas. Sure, these pizzas are incredible, but I would try the calzones. They are to die for. 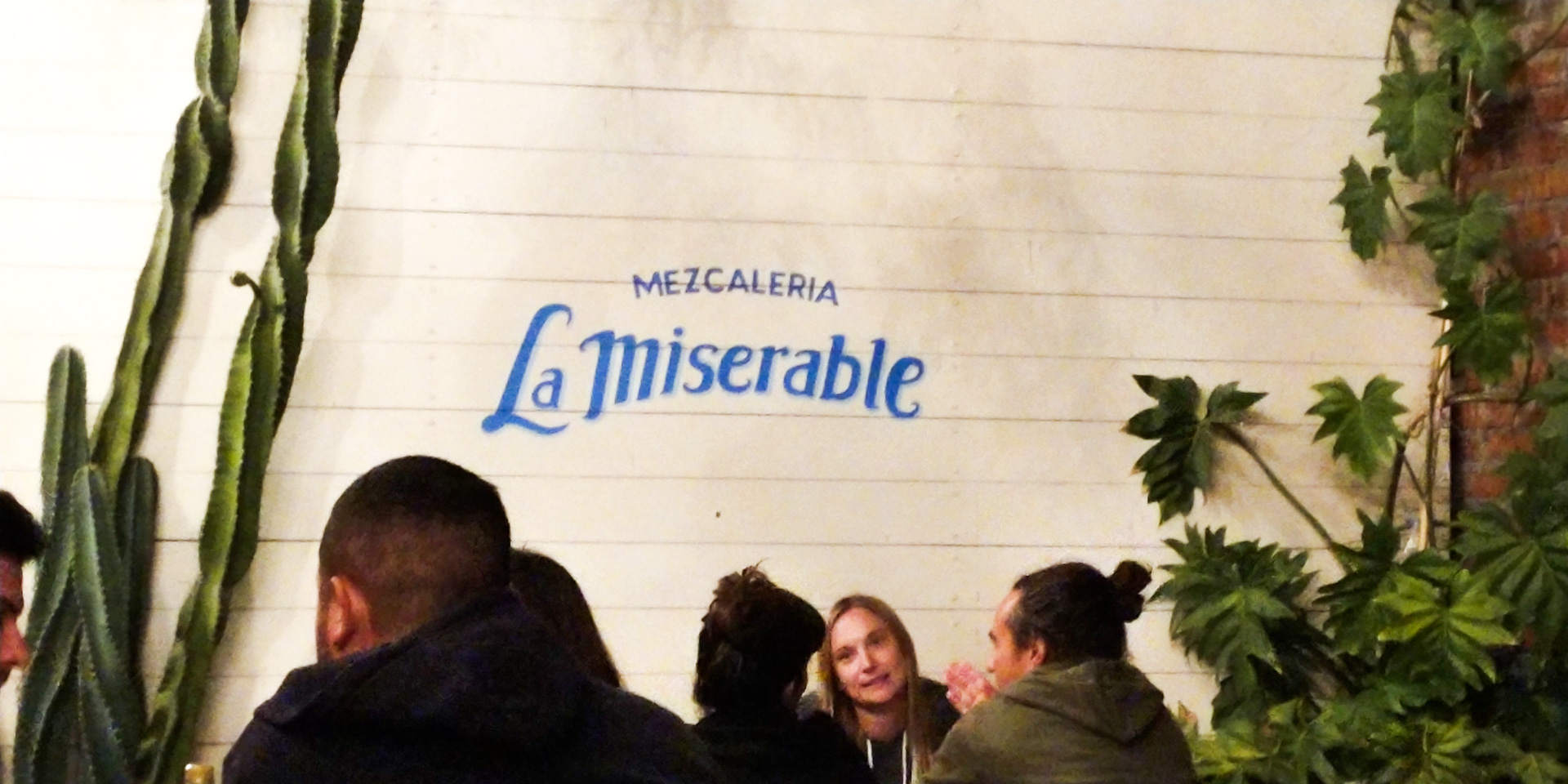 There are lots of little hole-in-the-wall bars in La Paz, Baja California Sur. Some cater to an upscale crowd, whereas others cater to a rustic, local crowd. The following is by no means an exhaustive list, it’s just a few bars to get you started on discovering this wonderful place.

This bar/restaurant is one of the best spots on the Malecon beach boardwalk in La Paz, Baja California Sur. It has an unforgettable ocean view, great service, and a really laid-back, welcoming vibe catering to all types of patrons.

It only serves bar food—though well prepared!—and it features artisan beers from Baja Brewing Company (a local microbrewery that is well known throughout all of Mexico). If there’s a sporting event, this is one of the best places to view it, while getting that beachfront experience that Baja California is known for.

This bar is a can’t-miss location in La Paz, BCS. With top-shelf mezcales and even-better service, you’ll be welcomed into the local scene after half an hour of chatting with the friendly staff. This bar has options from the highest-priced, artisan spirits, to reasonably priced drinks for the average backpacker.

These two bars are affiliated with each other. El Cereso sells large bottles of beers, while El Parnazo sells mixed drinks like mojitos and margaritas. The two of these bars complement each other well. In addition, El Parnazo has a rooftop bar—that doesn’t have the best view—but with a fun atmosphere.

There are two locations of La Mexico that are very close to each other. The first is a nicer location with a second-story view of the water. However, for my tastes, I found the original location to have a better vibe. If you like reggaeton, then this dive bar gets packed with locals mingling and drinking cheap, liter beers.

*To find the original location, click here. (The nicer location (which doesn’t get too busy) is only a few doors north. You can’t miss it.) *To read reviews of La Mexico, click here.

Baja Club is a hotel/restaurant with a chic, rooftop bar. They serve Mediterranean food, though I would recommend visiting the establishment for the bar—the cuisine isn’t worth the price.

If you’re looking to hang out among the yacht goers in La Paz, Baja California Sur, then Baja Club is a great place to experience the variety of social strata that frequent this wonderful city.

La Paz is a magical place that appeals to all manner of people, from backpackers traveling on a budget, to yacht goers that are taking a break from the cold weather up north. All are welcome.

A calmer alternative to Los Cabos, La Paz is both quaint and charming, with as many tourist attractions in nature as there are establishments where one can relax in comfort. For anyone who truly wants to experience the Baja California Peninsula, La Paz is a place you can’t miss.