In many ways, Mariachis have become synonymous with Mexico. They are a symbol of Mexican culture, and many foreigners can identify them by their unique dress and lively, traditional music. And today, they can be found in all 32 Mexican states.

At Expat Insurance, we recognize that it can be an uphill battle when you’re assimilating into Mexican culture. Therefore, in this article, we offer a brief overview of mariachi music in Mexico. We’ll explain what it is, how it came to be, and what the future holds for Mexican mariachis.

Mariachi is a traditional style of music originating in the West of Mexico. States like Guanajuato, Colima, Nayarit, and Michoacan take great pride in their mariachi roots—but nowhere is that more prevalent than in the state of Jalisco.

A mariachi group consists of at least three musicians—though often far more—with violins, trumpets, and different sizes of guitars. A small guitar called a vihuela and a large bass guitar called a guitarron are standard accompaniment to the classical guitar played by mariachis.

All musicians take turns alternating between singing the lead and laying backup vocals. Many of these songs are romantic. However, a few songs can get rather crass and even lewd if the clientele is right.

Most notably, mariachis are recognized by their distinctive charro outfit. This helps to identify mariachi musicians at a glance so that you can hire them to serenade you on the street. Their outfit is almost always black or white, usually has lots of buttons and embroidery, and they wear a big sombrero.

They will carry their instruments with them also helping to signal their approach. In Mexican culture, mariachis are generally respected, and often sought after. Bars that have a mariachi night will fill up with patrons eager to request their favorite anthems—and they can charge hundreds of pesos a song.

Origins of the Word Mariachi

The word “mariachi” has many legends attributed to how it came to be. One theory says that it comes from the type of wood used to make the platform they dance from the pilla or cirimo tree. Another legend states that it comes from the hacienda of Maria H. (pronounced Maria-ache in Spanish). Between 1832, there are records of 100 baptisms, marriages, and burial ceremonies at their hacienda near the Santiago River in the Mexican state of Nayarit. It’s thought that the music could have arisen from these ceremonies at the hacienda of Maria H.

The most common folk etymology says that it dates back to the French occupation of Mexico under Maximilian I. They claim that mariachi derives its name from “mariage” (the French word for “marriage”), and that mariachi music developed from these weddings. However, that theory has recently been disproven.

In 1981, a letter was discovered dating back to 1848, where a Father Cosme Santa Ana was writing to the archbishop where he was complaining about the noise those mariachis made. This letter was written over a decade before the French occupation.

Whichever you believe, one thing is for certain: mariachi music was firmly established by the late 1800s in the state of Jalisco. 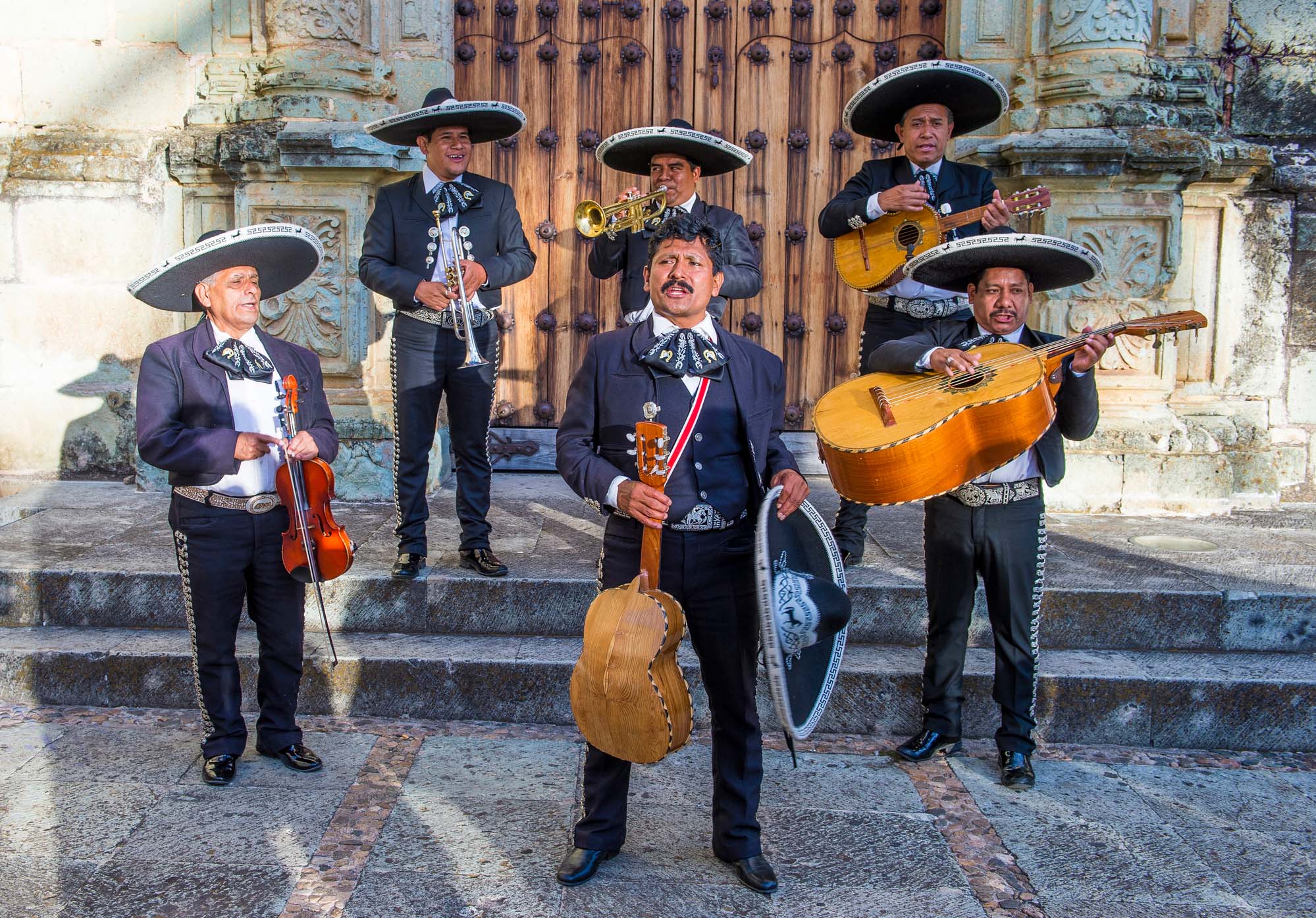 What is Mariachi Music

Before the Spanish conquest of Mexico, indigenous instrumentation consisted of flutes, drums, rattles, and conch-shell horns. These were part of religious rites with deep significance in Mexican culture.

The Spanish arrived and would introduce Western instrumentation during their Christian masses. Slowly, flutes and conches were replaced by woodwinds and trumpets; and stringed instruments were added to the mix, like violins, guitars, and harps.

Early mariachis looked nothing like they do today. They were dressed in peasant clothing (generally off-white pants and shirts, and huarache sandals). Mostly, they only played stringed instruments like guitars, violins, and harp—but they learned to modify these instruments, making different sized guitars and harps for different tones.

In the 1700s, these early musical groups formed their own musical styles, and one of them was called son. This would be the parent of many traditional Mexican styles, such as son jarocho, huapango, and, of course, mariachi.

A process took place throughout the 1900s. Throughout the reign of Maximiliano I, Mexico was heavily influenced by Europe. The music easily reflected this, with opera, waltzes, and salon music being performed and even written by Mexicans in Mexico.

One style of salon music were the orquestas típicas. This musical style was performed in the countryside, and the musicians dressed in charro outfits. In 1884, Carlo Curti organized an orchestra called the Orquesta Típica Mexicana, that went on to tour throughout Mexico—and also the United States!

In the Orquesta Típica Mexicana, the musicians were dressed as charros. It was from here that mariachi music inherited its distinctive garb. By the 1920s, even mariachis in urban settings were wearing it.

Mariachi in the Twentieth Century and Today

After the Mexican Revolution, what remained of the broken haciendas had to fire workers—including mariachis. Groups began to wander and play for a fee—a tradition which lives on to this day. This forced mariachi musicians to learn other styles of music in other time signatures, like polkas and waltzes.

Before this time period, in a way, mariachi music had not really been for the people. It had been reserved for the rich hacienda owners. It was only after the Mexican Revolution that mariachis began to play public venues.

What I have dubbed a Mariachi Diaspora occurred. Mariachi musicians would go to local cities and pueblos and play their music in public spaces like the kiosks of plazas. However, they did not abandon the tradition of serenades and performances at family events like baptisms, communions, weddings, and funerals.

One such place was Plaza Garibaldi, in Mexico City—which has become one of the meccas of mariachis today.

As mariachi music gained popularity throughout Mexico, a wealthy hacienda owner brought mariachis from the pueblo Cocula, Jalisco to play for Mexican president Porfirio Diaz in 1905. Also, in the early 20th century, American record artists began recording world music. One such recording, from 1908 – ‘09, is the Cuarteto Coculense—a quartet from Cocula, Jalisco. This was the first recording of mariachi music. (Click here to listen to it on YouTube. It’s really worth it to check it out!)

As the world veered toward nationalism with World War 1 on the horizon, mariachi music was promoted throughout the country as an emblem of Mexican cultural identity. It was a way of unifying the fragmented society in the wake of the Mexican Revolution—first in the medium of radio, which forced mariachi songs to shorten to about 3.5 minutes—and eventually in film.

Around this time, the popularity of jazz introduced the trumpet into the mariachi group. It took charge of the melody, pushing the violin to second place in carrying the melody. Also, the introduction of the horn seems to have coincided with the loss of the harp in standard mariachi instrumentation (whereas it’s still standard in son jarocho and huapango).

During the 1933 presidential campaign of Lázaro Cárdenas, mariachi music was played to rally the people into voting for him. He won the presidency and resided over Mexico from 1934 to 1940.

By the 1940s – ‘50s, mariachi music became more standardized, with its musicians undergoing a more formal training and education in music theory. Their appearance in many Mexican movies brought fame to the stars that performed in these films.

As the mariachi group grew in size, and its members became more accomplished musicians, the sounds of the son jalisciense were gradually replaced with the amalgamation of traditional and modern musical styles that has come to characterize mariachi music today.

In 2011, mariachi music was officially recognized by UNESCO as an Intangible Cultural Heritage, gaining global recognition as a uniquely Mexican experience.

Whether you are particularly fond of mariachi music in Mexico, one cannot fail to recognize its impact on Mexican culture. It has become a symbol of Mexican identity around the world.

However, it has never forgotten its roots. Elements of the son jalisciense musical style can still be heard in the songs played today. Mariachi musicians playing in plazas and at ceremonies are a standard that can be seen from the Yucatan Peninsula to the states along the US border. And mariachi musicians are still identified by their distinctive charro outfits.

This only serves as another reminder that history is still alive and well in the traditions that exist in this wonderful country.